Before I go into the details of the trade post, I made a couple of changes to the blog. To the right, underneath my profile information, you'll see a sidebar titled "Want Lists Recently Added". I think that's pretty self explanatory. I have hundred of non-completed sets that I will be adding to my want lists over time, so if you've got some dupes you want to unload, check back frequently. We'll try to work out a trade because I'm sure I've got something you need.

The second change is the background. Yup, I've changed it again. Maybe with the beginning of each month, I'll choose some different Red Sox cards to use for the background. Most of what you see currently in the background are courtesy of T.J. at The Junior Junkie. If you have some spare Ken Griffey Jr. cards, he'll be glad to take them off your hands. I sent him a couple of stacks of Griffey Jr's, and he sent me a couple stacks of Red Sox. Here's some more of them! 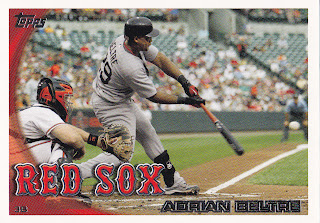 Adrian Beltre. DO NOT...I repeat DO NOT rub the top of the man's head! 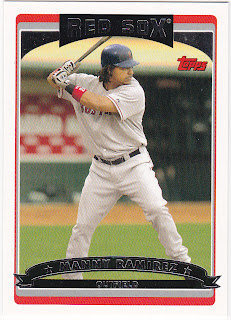 Manny. You either loved him or you hated him. There was no "meh" when it came to Manny. 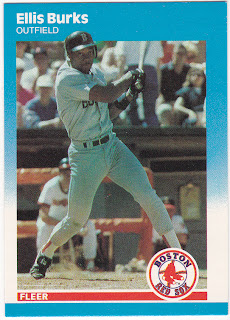 Ellis Burks. My favorite player from the late 80's to early 90's. If I ever decide to become a player collector, I would probably start with him. 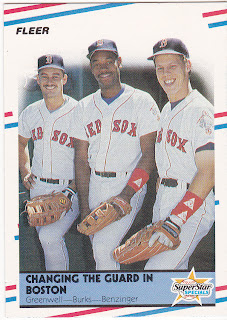 Beginning with Mike Greenwell at the end of the '86 season, there was a youth movement that featured the three players on this card. Greenwell and Burks roamed the outfield together until 1992, after which Burks signed with the White Sox as a free agent. Todd Benzinger was traded after the 1988 season along with Jeff Sellers and Luis Vasquez to the Reds for Nick Esasky and Rob Murphy.

Also part of the youth movement (but not included on this card) were Jody Reed, John Marzano and Brady Anderson (who started the season with the Red Sox but was traded in July 1988 with Curt Schilling for Mike Boddicker). 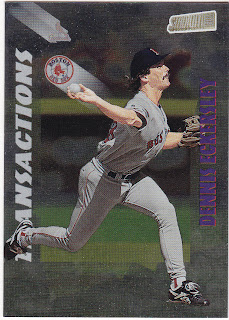 Dennis Eckersley. The only person who could wear a mullet better than Jaromir Jagr. 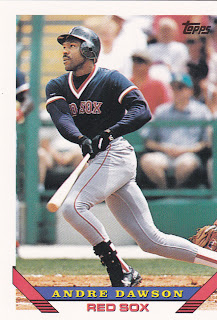 I have plenty of 1993 Topps Series 1 and 2 but no Topps Traded. Thanks to T.J. that glaring ommision has been remedied. 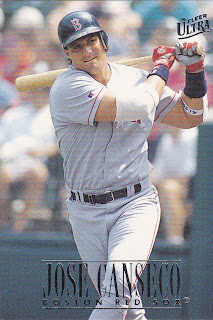 I will confess to being elated when the Sox traded for Canseco and disappointed when they traded him away. The Red Sox always seemed to get bigger name players at the end of their careers; Tom Seaver, Andre Dawson, Jack Clark, etc. I was psyched that we actually got somebody who was still reasonably valid, because at this point players really still didn't want to come to Boston. We had also just had a few lousy years with Butch Hobson as the manager, so something like this was a sign that things were looking up. 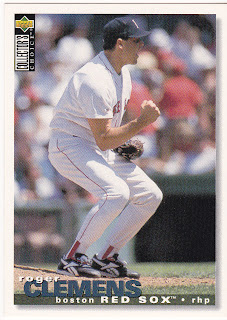 It was a lot of fun going through them and I'm always willing to trade. I'll keep sending you Griffey's if you keep sending me Red Sox. Thanks T.J.!