Since this post is about football cards, I'm sure a lot of you will zoom right by it. But for those of you who don't, I often buy those 100 card baseball repacks that are $4.99 at Target. But they haven't had any for a while, so I was forced to buy the 75 card football repack that includes one pack as well. These repacks also boast that one in four boxes has a "hit".

I generally buy one of the other three boxes, but this time I was lucky because I was hit with a "hit". 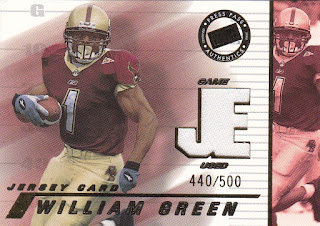 Now don't get me wrong. I do feel a twitch of excitement whenever I see one of these cards show up, regardless of who it is.

This is a jersey card of William Green from 2002 Press Pass. I have no idea (or don't remember) who William Green is. So pardon me whilst I do some research....

Ok, he was a first round pick of the Cleveland Browns in 2002. Beset by alcohol and drug problems, he was out of football by 2006. He is now an ordained minister. 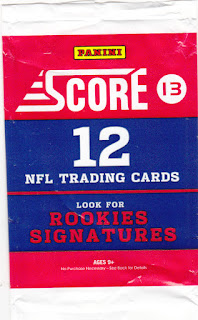 2013 Score was the pack that was included. 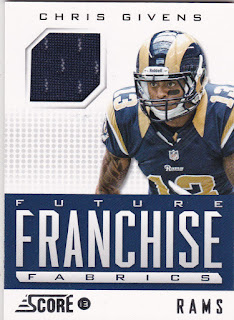 Inside the pack was another hit! Zoinks!

I have no idea who Chris Givens is either. Time for more research....

He led the Rams in receiving yards his rookie season (not a bad way to start your career), but has declined since (a good way to end your career). After being traded to the Baltimore Ravens last season, he signed with the Philadelphia Eagles just last week.

Even though I was "forced" to buy this repack, it wasn't so bad after all.
Posted by Swing And A Pop-up at 3:40 PM 2 comments:

I have to admit getting a bit jealous about reading posts about autos that other bloggers have gotten from retired or current players through the mail. I also have to admit I've wanted to do this myself, but have no idea the proper way to achieve some level of success. So I'm asking the blogosphere, what's the best way you've found to go about doing this?
Posted by Swing And A Pop-up at 6:08 PM 5 comments:

I'm Getting Around To It

"I'm getting around to it."

I've said that countless times over the past few months. Right now I am so far behind in just about everything. Case in point: I received these two cool cards from Matt from the awesome blog "Bob Walk The Plank" over two weeks ago and I haven't even thanked him, much less posted them. 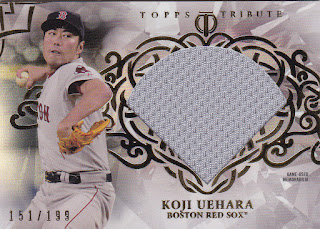 2015 Topps Tribute. These are cards I will never be able to afford. So I have to wait for Matt to send me things like this very, very cool Koji Uehara relic. 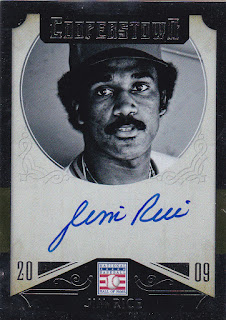 How did Matt know that Jim Rice is my favorite player of all time? Maybe I mentioned it somewhere, or maybe he's just that good. (Not that I'm being greedy or anything, but if you ever happen to see anything from Ellis Burks...) 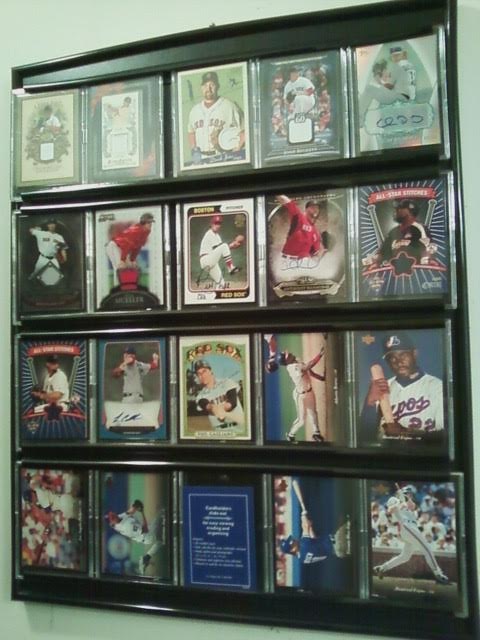 The Jim Rice auto will fit in nicely next to the 1972 Phil Gagliano auto. Someday I'll have this all filled with Red Sox.

Hello everyone, here's the second half of what I bought at the last card show I went to. You can see the first post here. That post had all the cards, this is all reading material. 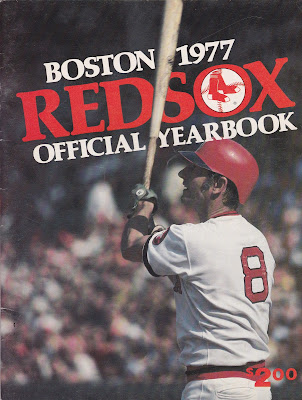 Of course, when I saw the 1977 Red Sox yearbook, money was no object. It was going to be mine. 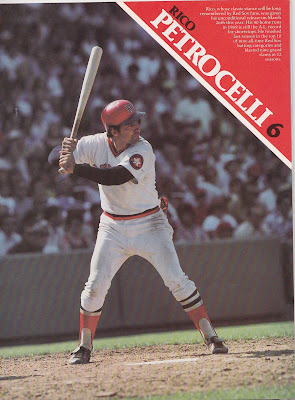 Even though I started collecting in 1977, I don't remember watching any Red Sox games, so this yearbook was full of players I never saw or don't remember seeing play. 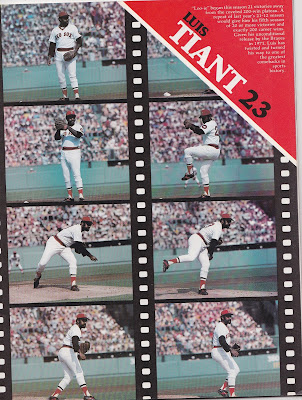 Just like I used to mimic Dennis Eckersley's pitching motion, I also used to do the same with Luis Tiant. Sad to say I was extremely wild when doing this. In fact, the safest place to be was at the plate, because the ball was coming nowhere near you. 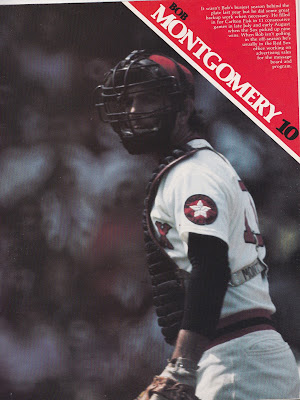 I remember Bob Montgomery more as the Red Sox announcer than the Red Sox catcher. This was also the last year he got a page all to himself. 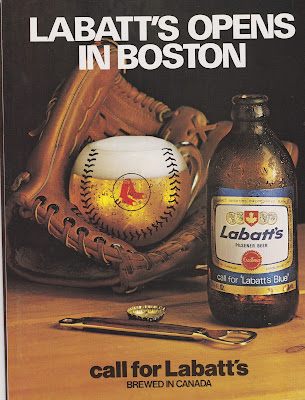 I have never had a Labatt's Blue Label. 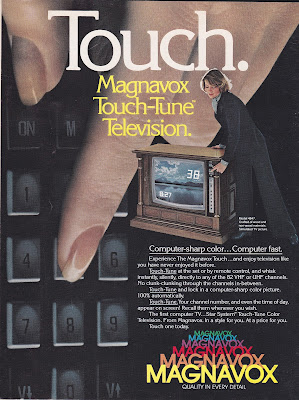 The back cover always featured an ad for Magnavox. Back then they were boasting "Computer-sharp color...Computer fast". You also could "whisk instantly, silently, directly to any of the 82 VHF or UHF channels". 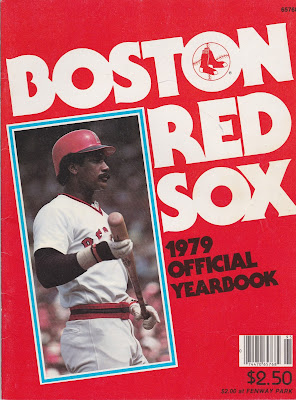 There also was the 1979 yearbook ripe for the picking. 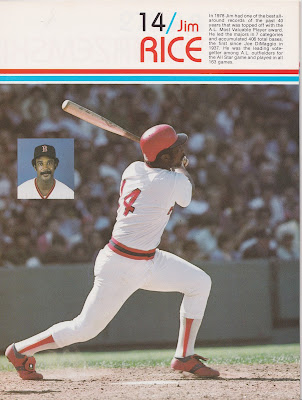 I've heard that players didn't like these uniforms because they felt like they were wearing pajamas. For me though, these are my favorite Red Sox uniforms. 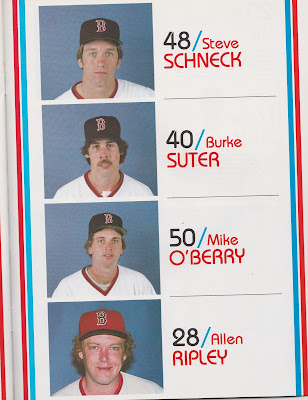 Both Steve Schneck and Burke Suter never made the majors.

Mike O'Berry played in 43 games for the 1979 Red Sox before being traded for Ted Sizemore.

Allen Ripley was 5-6 in 2 seasons for the Red Sox before being purchased by the San Francisco Giants in April of 1980. 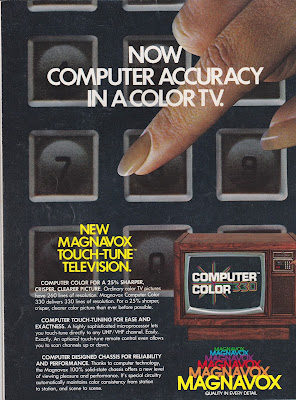 And here is the obligatory back cover Magnavox ad.

But the yearbooks weren't what got my attention. This was. 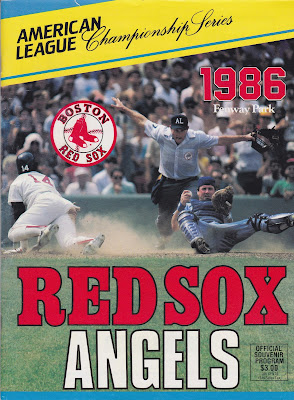 A program from the 1986 American League Championship Series between the Red Sox and Angels. 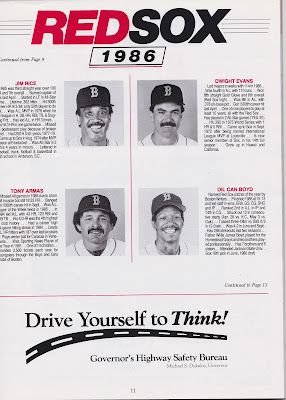 It's a typical program and it was a nice look back at all the players on the 1986 team. 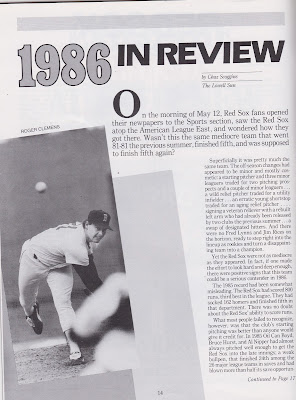 It also had a story reviewing the 1986 season which also brought back memories. 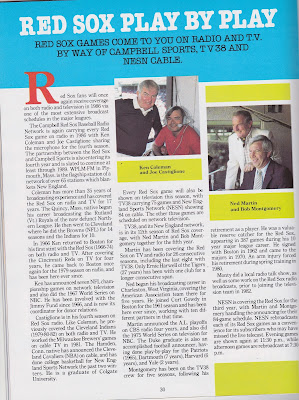 These were the radio and TV announcers back in 1986. Joe Castiglione is still doing the radio broadcasts and here you see Bob Montgomery as an announcer instead of a backup catcher. 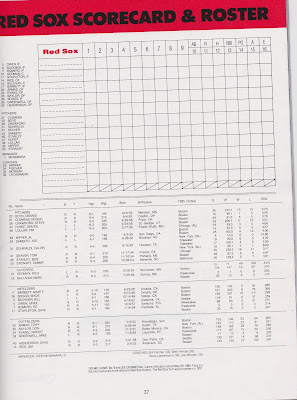 The scorecard inside was unused (and also gave me an opportunity to scan it very badly). 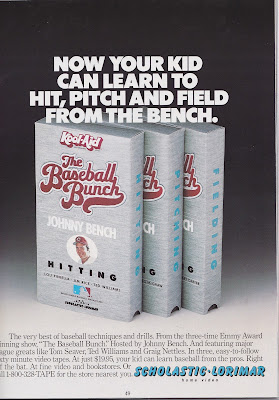 Did anybody ever watch "The Baseball Bunch"? It was on Saturday mornings around here. I would watch that, then cartoons until "This Week In Baseball" was on. 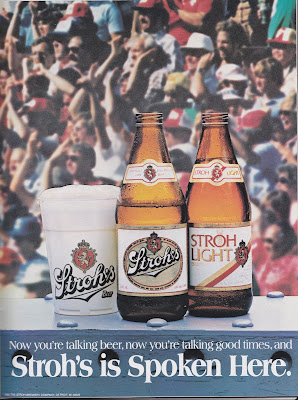 Most of the advertisements in the program were beer. Nothing wrong with that. 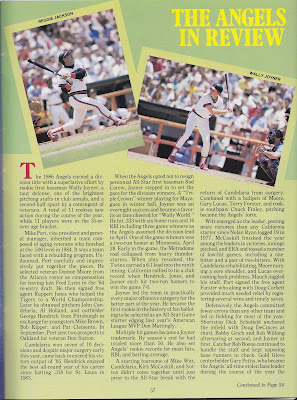 The last couple of pages had a little bit about the Angels.

But included with the program was the coolest part:

A ticket stub from Game 1!

I was expecting to pay probably five or ten bucks for this and then putting the two yearbooks on top of that plus the cards from the previous post, I was probably going to go over my twenty dollar budget.

Would you believe all of this only cost me nine dollars? Six dollars for the cards and a dollar a piece for the yearbooks and program. I have no idea where this guy finds all of this cool stuff, but at these prices, I'm more than happy to take it off his hands.