While spending an evening trying to catch up on my blog reading, I came across a post by Chris at Nachos Grande, that let it be known that he was one card away from completing his 1990 Topps baseball set.

Now my first thought was, "How can anybody not be finished with 1990 Topps?"

My second thought was, "I have that card! I probably have a dozen of that card!"

1990 Topps was right in the middle of my second foray into card collecting. Which means I have it all from that era, Leaf, Donruss, Upper Deck, Studio, Triple Play...if it was overproduced, I overcollected.

I even collected Pro Set Platinum (for all you football and hockey collectors out there). That's also when I collected most of my basketball cards as well.

So to make a short story long, I contacted him and offered him the overproduced 1990 Topps Willie McGee and he graciously accepted.

So what did he send me? 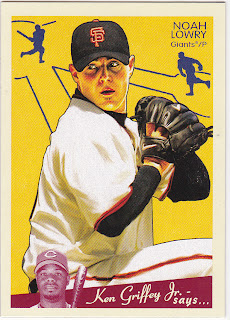 Thanks Chris! We'll definitely have to do this again sometime.
Posted by Swing And A Pop-up at 8:08 PM