Crash From The Past: 1991 O-Pee-Chee Premier 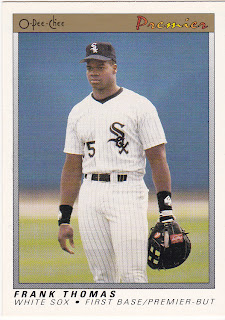 Did anyone out there collect this set besides me? Did anyone pay 3 or 5 bucks a pack like I did? 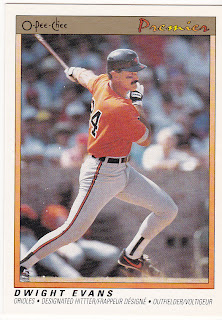 This was the one of the first "Premium" sets that I collected (I was also buying Stadium Club at the same time). 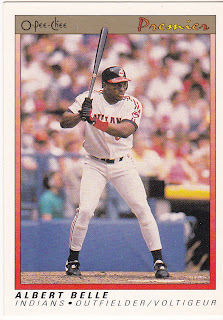 The only reason I was attempting this set was because of the success of the 1990-91 O-Pee-Chee Premier Hockey Set. I had a friend who had completed it and at the time it was going for about $100. I was buying a lot of hockey back then (except of course, the afformentioned OPC Premier set). I was hoping that the baseball edition would follow suit. 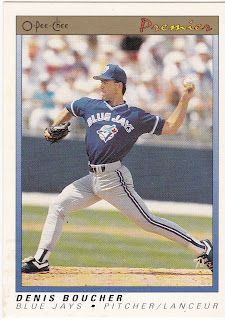 I didn't like spending so much of my card budget on so few cards, but the Frank Thomas was booking for $18 at the time and I had pulled one almost immediately. There were also several cards going for $4 a pop. It was a 132 card set with 7 cards per pack, and since it was made for the Canadian audience, it was quite heavy on Blue Jays and Expos. 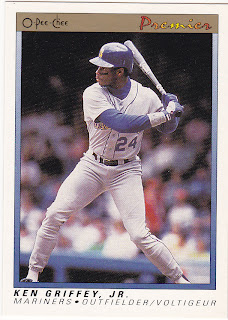 Wow, did this set tank. Not only did it not reach the $100 set value, you don't even find the set listed in price guides. A quick internet seach found a box selling for $5.95 and packs for .19 cents. 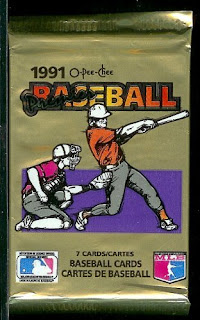 
So if you ever hear somebody complain that a dollar doesn't buy much anymore, yes it does.