The One Baseball Card I Want

Is there a card that you've always wanted but so far you just haven't picked it up? I'm not talking about a '52 Mantle or a George Brett rookie, I mean something that's just a couple of bucks. In my case, I've seen the card several times, but for whatever reason never picked it up. And it's from a set I should be working on finishing rather that buying new stuff. 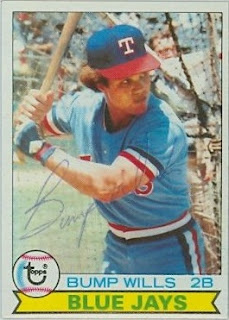 The 1979 Topps Bump Wills error card. I think this was the first error card I was aware of and it looked so cool to me. When the '79 set came out, I think it was around $5, maybe more, and that was way out of a 10 year olds price range for a single card. Then when I got older, my attentions were drawn to other card conquests. But I've decided I really should focus more on finishing what I've already started than I have in the past. Now I know I could just go to ebay or Amazon and just get it there, but that's no fun. I want to see if someone out there has one they'd like to trade. It doesn't have to be autographed, in fact I'd prefer that it wasn't. So if you've got one you'd like to trade send me an email at swingandapopup@gmail.com and let's work something out. Thanks for reading!