Cards From the Binder (Chapter 1)

From what I've read from other bloggers, a lot of you seem to keep your collection in binders. I have way too many cards to do that. I keep my sets in the standard 200 count, 300 count, etc. boxes (depending on how big the set is). I also have plenty of sets where I only have a few cards in the set so I keep those in plastic cases. Plus I also have several monster boxes of cards that haven't made it into my sets and even more monster boxes of dupes. I do have one giant binder where I've stashed an assortment of cards and some autographs I've gotten at card shows.

So let's look at the first half of page 1, shall we?

Mosi Tatupu autographed card. I used to attend a lot of card shows in the early 90's. Most of them had autograph guests. Since I rarely seem to get "hits" when I buy packs of cards (when I swing I tend to pop-up. Get it?), most of the autographed cards in my collection I got in person. 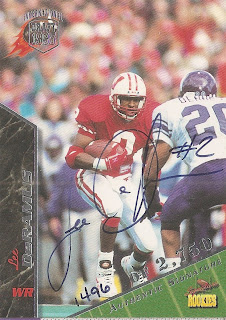 1995 Lee DeRamus Auto. I only bought one pack of Signature Rookies (I think it was $6.00 a pack - very expensive back then), and you got one autograph per pack. I couldn't lose, or could I? He was drafted by the New Orleans Saints in 1995 and played two seasons for them﻿.
﻿
﻿ 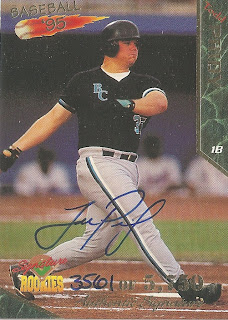 ﻿
Some of these cards I could not tell you how I got them. This is one of them. Todd Pridy was drafted by the New York Mets in 1990 and the Florida Marlins in 1992, but never made the major leagues. 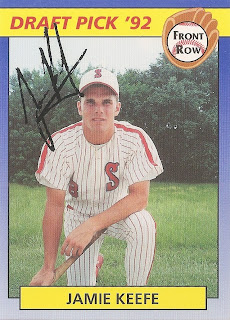 Jamie Keefe autograph. I got this in person at a card show. He was a local boy, and not too many players in my area get drafted by a major league team. The Pirates drafted him in 1992, but he didn't make the major leagues either. 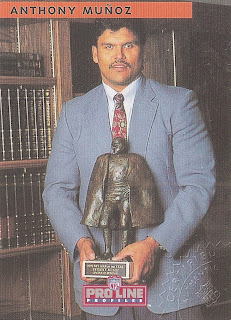 1992 Pro Line Profiles Anthony Munoz. I couldn't afford very much while I was in college, so I would get boxes of this for $15. I liked it because there was one autographed card per box. The autograph is actually on the back of the card.
﻿ 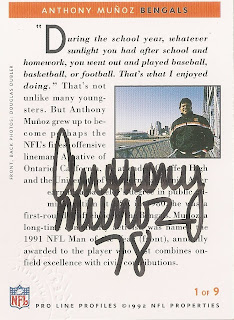 So that's the first five cards of the first page. I would show you the entire page, but it took me about two hours to get this far. I'll show more of what's in the binder in later posts.
For those of you who manage to post once or twice a day and include scans of cards, I salute you.
Posted by Swing And A Pop-up at 7:30 PM