Programs! Get Your 55 Year Old Programs! (The Finale)

Here is the third and final post about my 1958 Red Sox program. You can read about the first two here and here. 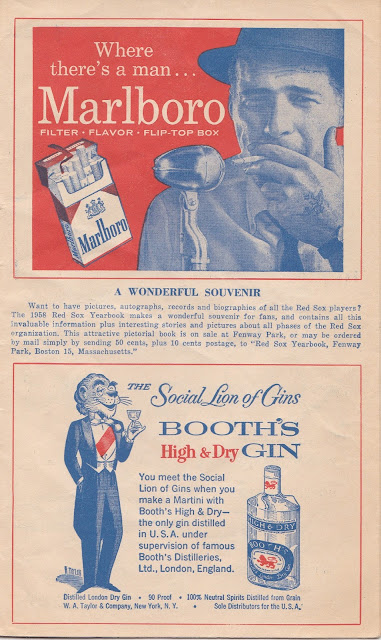 "Where there's a man"...the advertising back then was so much different than it is now.

Marlboro's are still quite popular, in fact they are the largest selling brand of cigarettes in the world.

From what I could find out, Booth's Gin is still being made, but the "High & Dry" version isn't. I'm actually quite surprised how little information I'm able to find out about some of these companies.

The "Wonderful Souvenir" is actually the 1958 Red Sox Yearbook. It's also called an "attractive pictorial book" later on in the paragraph. You could buy it at Fenway Park or order it by mail for 50 cents, plus 10 cents postage.

Checking the Yawkey Way Store (which is the souvenir shop across from Fenway Park), the cost of the 2013 Yearbook is $10.00 plus $10.00 shipping and handling (which is ridiculous). 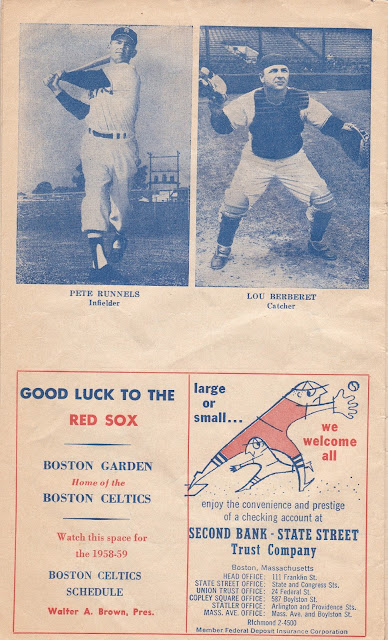 Lou Berberet was traded to the Red Sox from the Senators on May 1st of 1958 and played in 57 games for the Sox hitting .210 with 2 HR and 18 RBI in his only season with them.

I think both of these players were featured on this program because the last team both played for was the Senators.

I found a listing for a State Street Bank and Trust Company located at 1 Lincoln St. in Boston. I'm not sure if it is the same bank or not. I looked up a couple of the addresses from the program, and the building at 24 Federal St. which housed the Union Trust Office is now for lease, and the Copley Square Office at 587 Boylston St. is now a CVS. You would have thought in 55 years the bank would have changed names multiple times, but maybe not. 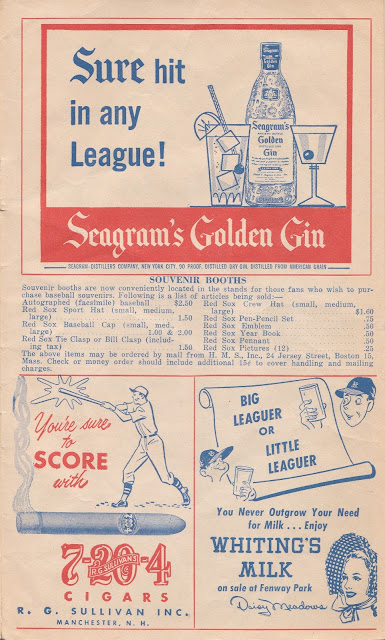 We've already talked about what happened to Seagrams on this post, so let's move on to R.G. Sullivan's 7-20-4 Cigars.

They are still being made (although their website only listed 3 places in the United States you could buy them), and they are now based in Londonderry NH (around 10 miles south of Manchester).

Whiting's Milk was sold to Dairylea Cooperative (then called Dairyman's League Cooperative Association) in 1966. According to dairylea.com it defines a cooperative as "a jointly-owned commercial enterprise (usually organized by farmers or consumers) that produces and distributes goods and services and is run for the benefit of its owners". Well that certainly helped me understand what one was.

According to a forum post on ancestry.com, Dairylea lost a lot of money and shut down Whiting's Milk in 1973. Dairylea's website does mention some financial difficulties in the 70's but does not mention Whiting's by name. There also seems to be some confusion as some websites state Hood bought Whiting's, but this same forum post says that Hood bought the land that Whiting's previously occupied (although I could not confirm that).

Check out how cheap the souvenirs were back then! I do find it odd that the tie clasp or bill clasp are the only things that have (including tax) next to it. 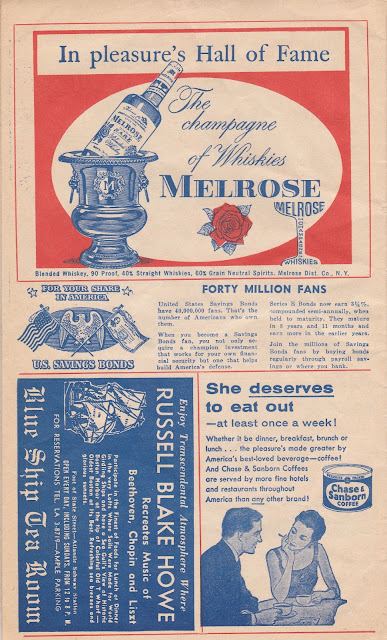 I wasn't able to find anything current on Melrose Whiskey, what happened to it, if it is still made, etc. I found a couple of online auction where I could buy a bottle, but they offered no info as to the status of the brand.

I am going to assume that the Blue Ship Tea Room is closed, because I can find nothing current about it. However, in 1964 the restaurant was sued by a patron who choked on a bone from a bowl of fish chowder. Apparently the specifics of this case is taught in law school.

She was not successful with her lawsuit.

And that's too bad, because she does deserve to eat out, and she could have heard Mr. Howe recreate music by Beethoven, Chopin and Liszt while she drinks her Chase & Sanborn coffee. The brand is now owned by Massimo Zanetti Beverage Group (Italy). They also own Hills Bros. and Chock Full O' Nuts, as well as some other lesser known coffee brands.

"Forty Million Fans" is just an advertisement for Series E United States Savings Bonds. As of June 1980, you could no longer purchase these. 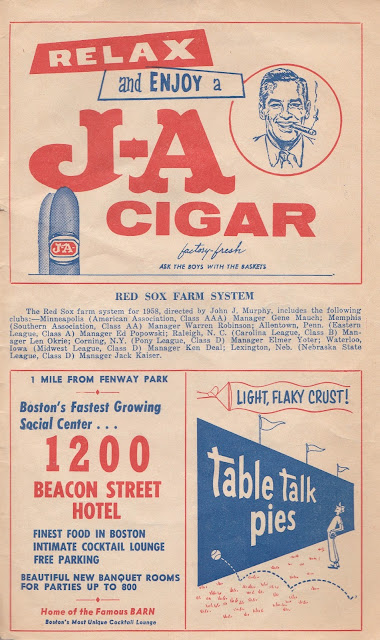 There is a company called J&A Specialty Distributors, which focuses on tobacco products, but I couldn't find any information on their history to see if it was the same company.

This next ad is one of the things that confuses me about Boston (other than the countless one way streets). 1200 Beacon Street Hotel, (which I am going to assume is located at 1200 Beacon Street) offers the "finest food in Boston", which is fantastic, but 1200 Beacon Street is in Brookline, not Boston. It is now a Holiday Inn, which like the ad states is 1 mile (or 1.1 miles according to hotelplanner.com) from Fenway Park.

Table Talk Pies are still around and everytime I see one of them, I am this close to getting it. Damn diabetes. 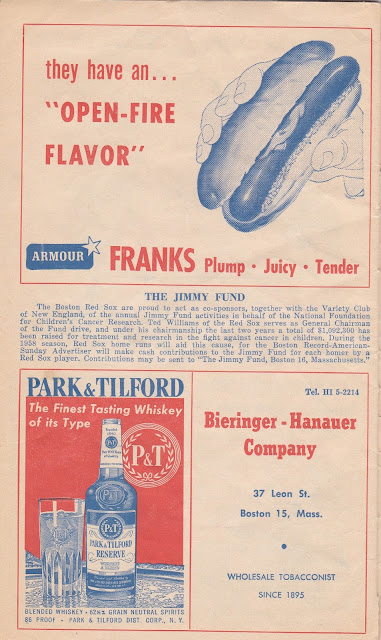 Armour and Company (which also produced Dial soap, as soap can be maufactured as a by-product of meat packaging) were the producers of the Armour hot dog brand back in the 50's. Now the brand is owned by Smithfield Foods,which is based in Virginia.

Man, these old whiskys are hard to track down. Nothing current on Park & Tilford, although like the rest of the whiskys, you can find some of the old bottles for sale online.

Ditto for the "Wholesale Tobacconist". I had never even heard of the word tobacconist before I wrote this post. When I say that I can't find anything current, it doesn't mean I didn't find anything, usually it was court cases...which is all I found out about the Bieringer - Hanauer Company.

That and 37 Leon St is now Meserve Hall, part of Northeastern University.

Rounding out the page is a blurb about the the Jimmy Fund. The Jimmy Fund has been partnered with the Red Sox since 1953 and supports the search for new cancer treatments and cures for both adults and children at Dana-Farber Cancer Institute, the top cancer hospital in New England.

Two things you may or may not know about the Jimmy Fund;

1.) The origin of the Jimmy Fund involved the Boston Braves, not the Boston Red Sox.
2.) There actually was a "Jimmy", although that was not his real name. 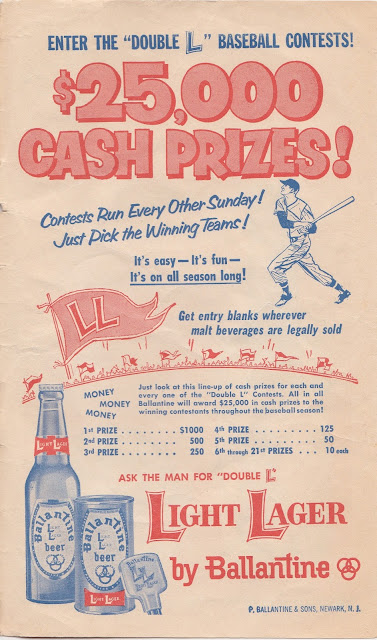 I couldn't find anything about the "Double L" baseball contests, but Ballantine at one point was the fourth largest brewer in the United States. The company went into decline in the 1960's and by the 1980's Ballantine Ales were produced by numerous outsourced companies. Since 2005, the Ballantine brand has been owned and marketed by the Pabst Brewing Company, although production is outsourced to the Miller Brewing Company. 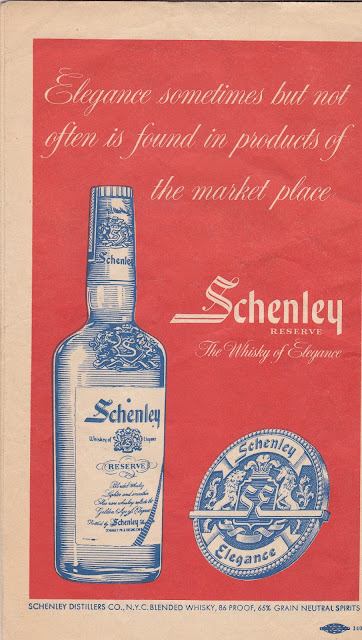 Schenley Distilleries was based out of New York City and had its headquarters in the Empire State Building. It was eventually purchased by Guinness in 1987. I do not see any Schenley products on their website.
Now as far as my guess about the game...the program features the Washington Senators. Back on one of the first pages it says the next night game is August 5th. Well, on August 5th...they played the Senators. It was the first game of a three games series.
According to baseball-reference.com, on that day Bill Monbouquette won his first game of the season while pitching a complete game in a 7 - 1 Boston win. Jimmy Piersall hit his 8th home run and Ted Williams hit his 19th.
Pete Runnels went 3-5 with an RBI and Lou Berberet didn't play.
I hope you enjoyed going through this Red Sox program with me. I found the majority of information on Wikipedia, but like I said earlier, I was surprised how little information I could find on a lot of these old companies.
As far as future posts go, I'm going to try to mix it up some so not every post is a "look what I got for cards in this repack" post, although for better or worse, that is still probably going to be the majority of them.
But I can promise you tomorrow's post will be something different.
Thanks for reading!
Posted by Swing And A Pop-up at 8:24 PM