Programs! Get Your 55 Year Old Programs!

I don't have a lot of "vintage" cards or other baseball related items. I would like to someday have a decent collection of vintage cards and memorabilia, but like it is for most people, quite out of my price range.

One thing that I do have is a 1958 Red Sox program. I' ve seen one of these on Ebay listed for $60.00. Of course, that one does not have the black scribble at the top of the program. I'm pretty sure this was from my grandparent's house, so I wouldn't be surprised if I made that scribble when I was destructive little tyke.

The program is 21 pages long. I'm going to go through the whole program page by page. That would make one long-ass post, so I'll have pity on all of you, and break it down into a series of three 7-page posts. 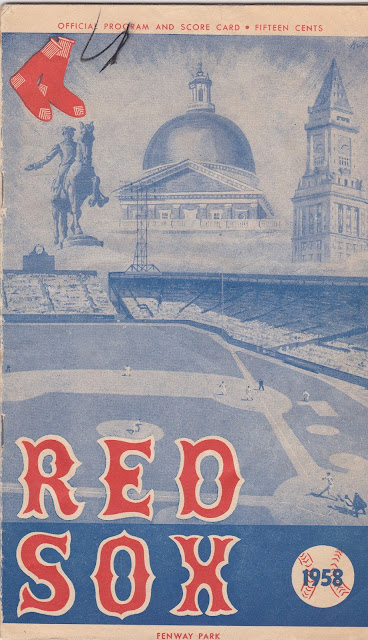 The cover page obviously shows Fenway Park and the Red Sox logo, but embarrasingly, I did not know what all three of those landmarks were in the background. I knew the first one was the Paul Revere Statue, which is in the North End of Boston. The North End is a neighborhood of Boston and is the oldest residential community. Nicknamed "Little Italy", due to its significant Italian American population, the North End has been inhabited since the 1600's. The statue however, has only been there since 1940.

The middle landmark is the Masachusetts State House, which houses the Massachusetts General Court and the offices of the Governor of Massachusetts.

The third landmark (on the far right was) the one I didn't know. After researching it, I believe that it is the Custom House Tower, which is now Mariott's Custom House Hotel. Located at 3 McKinley Square, in 1958 it was Boston's tallest building, which probably explains why it is on the cover of the program. Currently it is now the 17th tallest building in Boston. 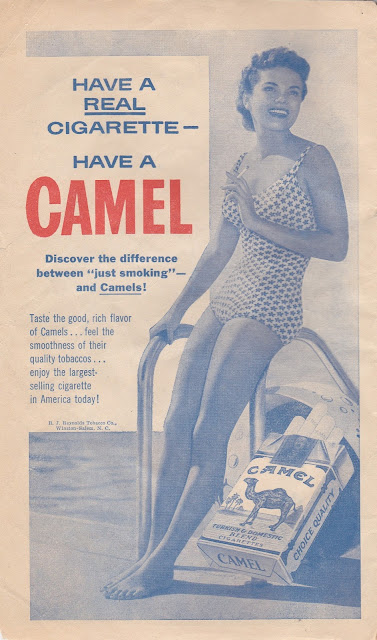 Much like todays programs, much of it is devoted to advertising. One of the things I find interesting about any old advertisments is finding out if the company is still around. This one I don't need to look up. We all know Camel cigarettes are still made. 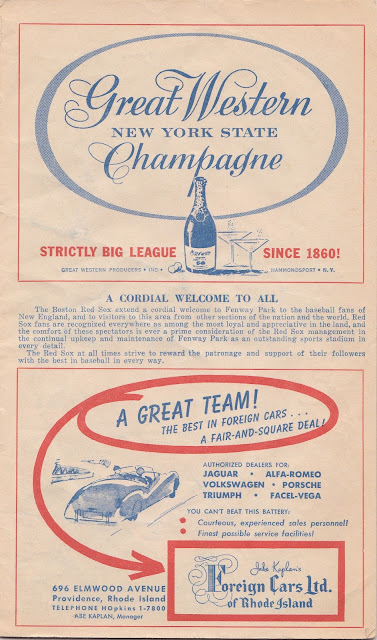 Great Western Champagne is still being made, although the company has been sold several times since 1961. Coca-Cola owned it for a spell, as did Joseph E. Segram & Sons. According to the company's website, the company has returned to "local family control" in 1995. The company is called Pleasant Valley Wine Company, which is what it was called back in 1860 when it was founded. So I am going to assume that the "local family control" are descendants of the original owners.

I was unsuccessful in finding any information on John Kaplan's Foreign Cars of Rhode Island. Even punching in the address came up empty.

I was unfamiliar with the Alfa-Romeo and Facel-Vega cars, so I did a brief search on them.

Alfa-Romeo is a Italian company which stopped importing cars to the US in 1995, however it has been announced they will re-enter the US market in 2014. In 1958, the cars had only been available in the US for a few years.

The Vega was a car made by Facel, which was a French manufacturer. They ceased business in 1964, due to their failed entry in the sports car market. Prominent owners of a Facel Vega included Frank Sinatra, Pablo Picasso and Dean Martin.

Sandwiched between these two advertisements is a couple of paragraphs welcoming you to Fenway Park. 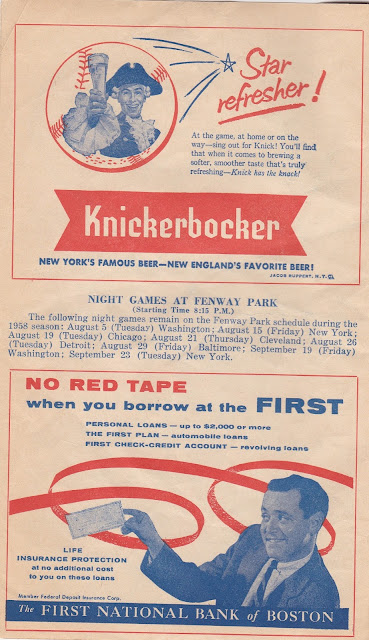 I knew Knickerbocker beer wasn't made anymore, but I tried researching it, but everyplace I looked gave me different information. So it either was no longer made in the 70's, or the 90's. I would tend to think the 90's is correct, because I thought I remembered seeing it at some point.

First National Bank however, was easier to track down some information on. Founded in 1784, and at the time called The Massachusetts Bank, it has gone through numerous name changes and dozens of acquisitions. In just the 1990's you may have known it as Bank of Boston, then BankBoston which then became FleetBoston Financial. Currently is exists as an international private bank, which is a subsidary of Bank Of America (which bought FleetBoston Financial in 2004). Got all of that?

As you can see, in the 1958 schedule consisted of mostly day baseball as there are only 8 night games from August 5th to September 23rd. This year there are potentially 35 (although 4 games are TBD's). 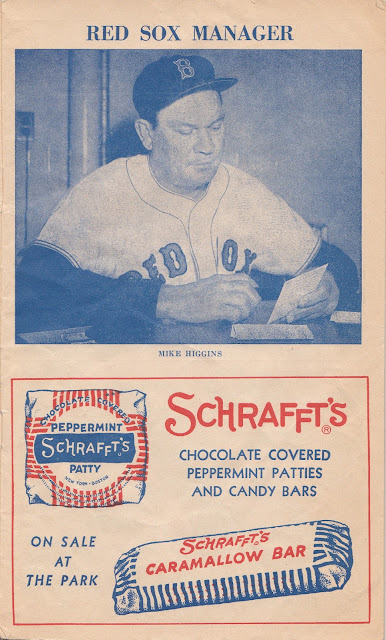 Pinky Higgins was the manager of the Red Sox at the time. He was the manger from 1955 - 59 and 1960 - 62. The Red Sox never finished higher than third place during his tenure. As he also served as the Red Sox Vice President and later as the General Manager, he is considered to be one of the main reasons racial intergration was slow to develop in Boston.

After running over four highway workers and killing one of them, he was convicted of negligent homicide and ended up in prison in early 1969. He served only two months of a four-year sentence, and died on March 21, 1969 of a heart attack after being paroled only two days earlier.

Schrafft's was a company that made candy, ice cream and later became a restaurant chain. The factory was located at 529 Main St., Charlestown, Massachusetts. Schrafft's was bought by PET Milk in 1967, and the ice cream, candy and restaurants all became separate companies. The candy and restaurant chain no longer exist and the building is now owned by the Flatley company, which lists it as a commercial property. The old Schrafft's neon sign is still prominently displayed on the building. 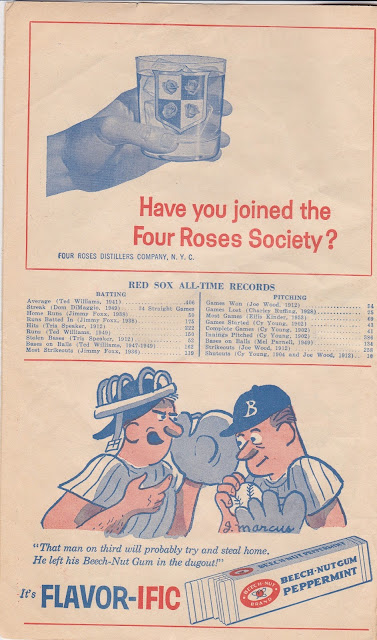 Have you joined the Four Roses Society? In 1958 Four Roses was a straight Kentucky Bourbon which was manufactured by Joseph E. Segram & Sons. It was the top selling bourbon of the 1930's, 40's and 50's. Irregardless, Segrams discontinued this and all other straight Bourbons in the US, so they could focus on the sale of blended whisky. The brand is now owned by the Kirwin Brewing Company (Japan), and has since discontinued the sale of blended whisky and reintroduced Four Roses Kentucky Straight Bourbon Whisky.

Beech-Nut gum was introduced in 1910, and I remember seeing this when I was a kid. I don't remember ever buying any and I know it's not made anymore, but I couldn't find out when it ceased production.

As far as the Red Sox All-Time Records are concerned, since this program was printed one-third of the records have been broken. Here are the new records: 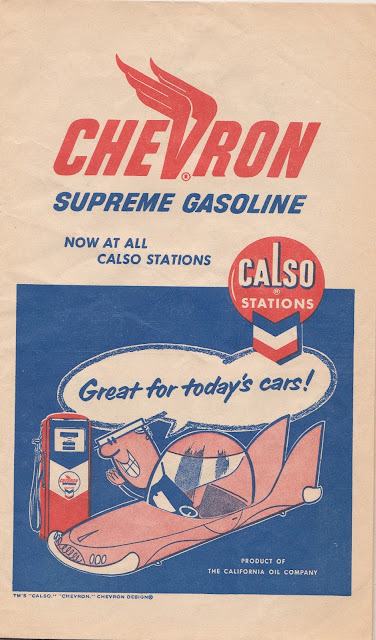 Chevron Corporation is still around and last year was named as America's third largest corporation in the Fortune 500.
Calso was part of the Chevron brand, although although according to Wikipedia, it was only in use from 1946 to 1955.
That's it for the first seven pages of the program. See what I mean about it being a long-ass post if I had decided to post about the whole program at once? So since you've already got time invested in the first seven pages you won't want to miss the next post which will feature the middle seven pages.
Thanks for reading!
Posted by Swing And A Pop-up at 2:08 PM