I've heard that one of the keys to a successful marriage is to have things in common. My wife and I do share some of the same interests, but there is one aspect of our lives that we will never share a common bond.

Our choice of television programs.

When I was a kid, I used to laugh at my mom because of how little she knew about current pop culture. It seemed like once the pop culture train reached 1960, she decided that was it, she wasn't going any further. This included fashion, hairstyles...everything. Prior to that however, she's a wealth of information.

Want to know something about Ricky Nelson? Ask my mom.

Want to know who played second base for the Brooklyn Dodgers in 1954? Ask my mom.

DO NOT ask her about the Beatles, Rolling Stones, or who played second base for the LA Dodgers in 1968.

Apparently I jumped off the pop culture train about 2002. I've arrived at this date because you can ask me anything that happened after 2002 and you will probably get a blank stare. It took me years to realize I wasn't a passenger anymore. I lost my way with music first. When someone would talk about what I thought was a new band, I would later realize this was their 3rd or 4th album and they had been on the radio for years.

My wife is still riding the train. She tries to talk to me about current events/movie stars/music, etc., and I have no idea what or who she is talking about. In fact, during these conversations my "give a shit meter" isn't even on. In this respect, I am far worse than my mom, because at least she was aware of the Beatles, Rolling Stones and the LA Dodgers.

My wife loves reality shows. "Dance Moms", "Amish Maifa", "Housewives of Wherever", you name it, she's watched it. These types of shows irritate me so much, I will literally start shaking. So my wife and I watch TV in separate rooms. If we do watch something together, there is a good chance one of us is just putting up with it so we can spend some time together.

So as you can probably imagine, my wife has begged me to watch shows with her, and quite honestly, I haven't been interested in any of them. I do feel guilty about that. So a few weeks ago, she asked me if I would watch this season of "Dancing With The Stars" with her. I figured I could handle this show, and I found out I can. We DVR it, and fast forward through everything else but the dances and judges scores. True to form, the only people I'd heard of were Patti Labelle and Suzanne Somers. I was aware of Rumer Willis (because of her parents), and Michael Sam (because he was a football player), but I have no idea who anyone else is nor am I familiar with anything they did.

When I was growing up, "The Dukes of Hazzard" was my favorite TV program. So when I heard that James Best had passed away, I was bummed out for a bit. When I was a kid, I wanted to have a car just like the General Lee. Could you imagine me, with bad knees and a bad back, trying to get in the car through the f'n window? And if I tried to slide over the hood to the drivers side? Yes Virginia, we have a bleeder.

Although the circumstances weren't ideal this time, I do enjoy thinking back to when I was a kid and reminisce about a time where I had far less responsibilities and was still a passenger on the pop culture train.

So it shouldn't come as a surprise that my favorite posts to write are ones that pertain to what I collected when I was a child. In the early 80's, not only was I collecting cards, I would also do the sticker books that Topps would produce. So when I saw a stack of of thirty-five stickers from the 1982 book on Listia, I moved in for the kill.

I won them for a little bit less than seven hundred credits. Here they are in their pocket-page protected glory: 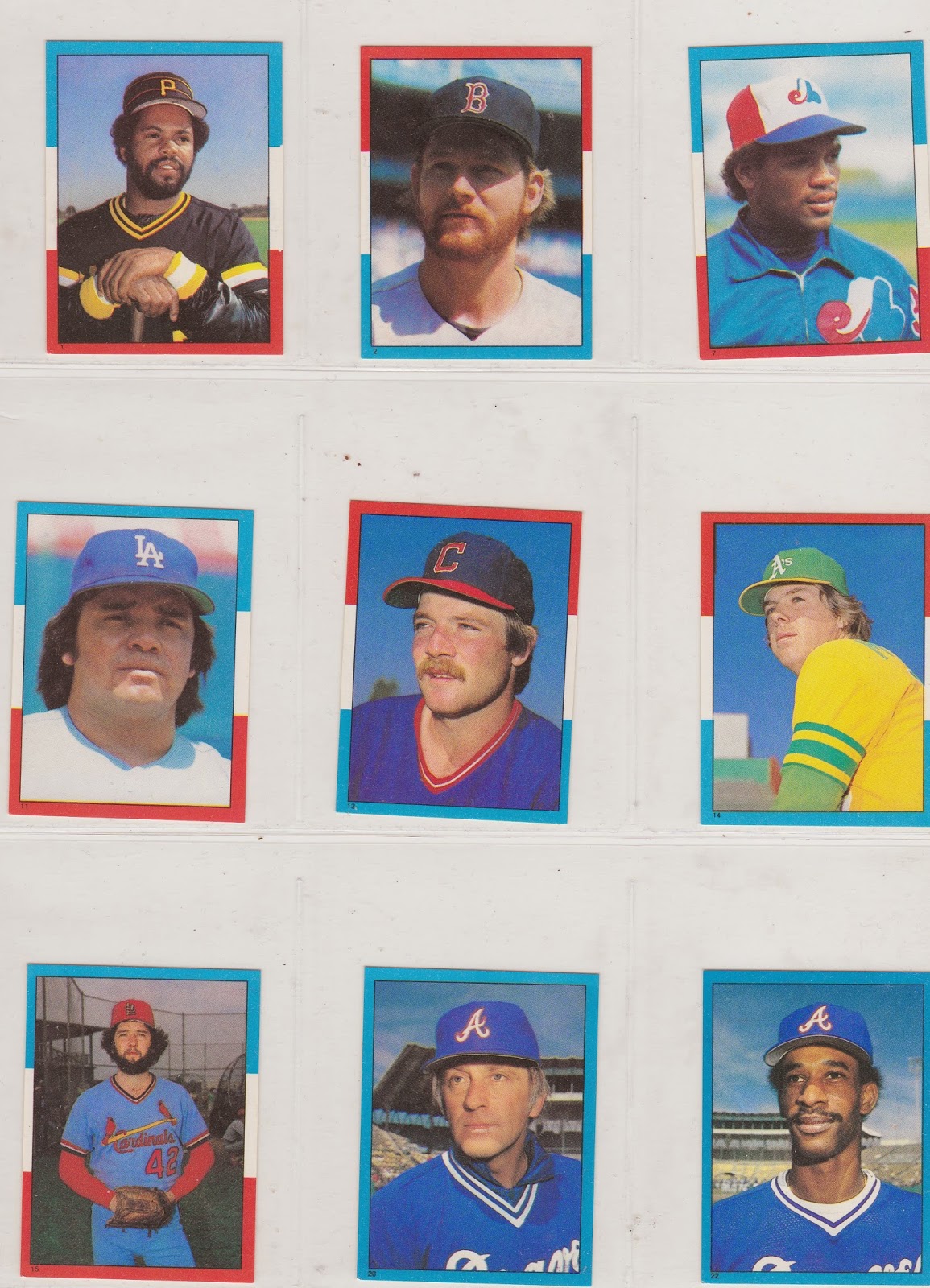 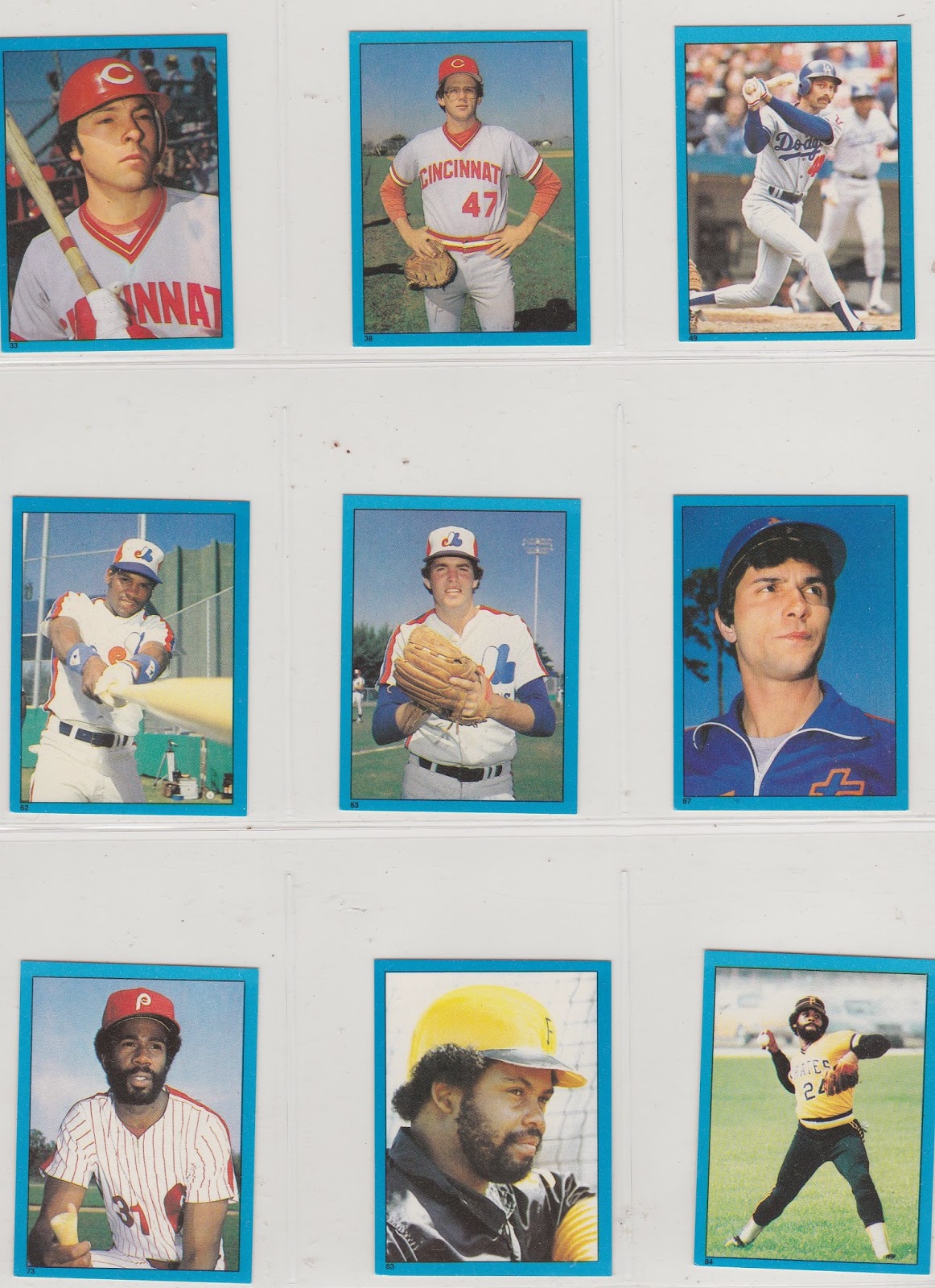 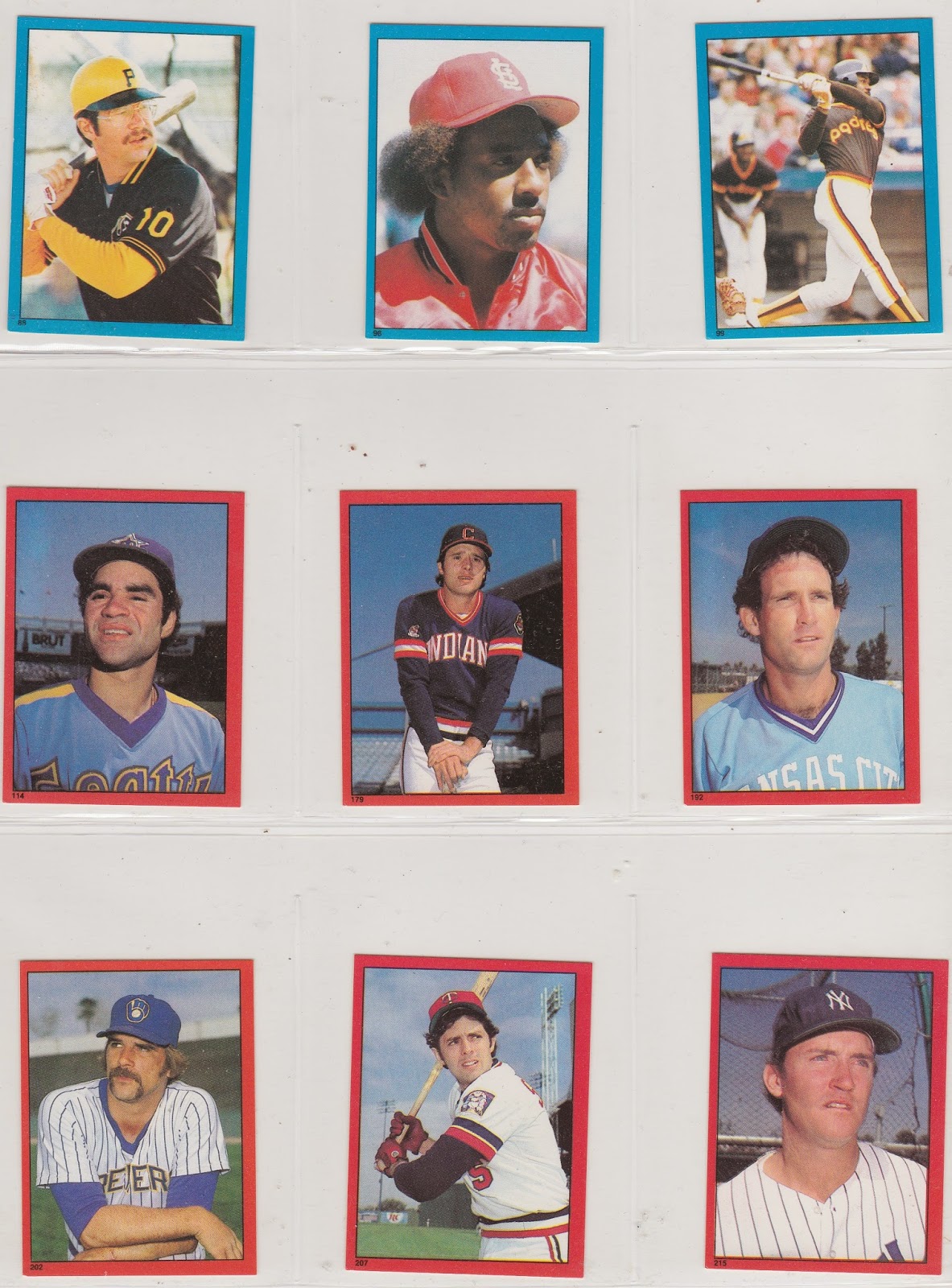 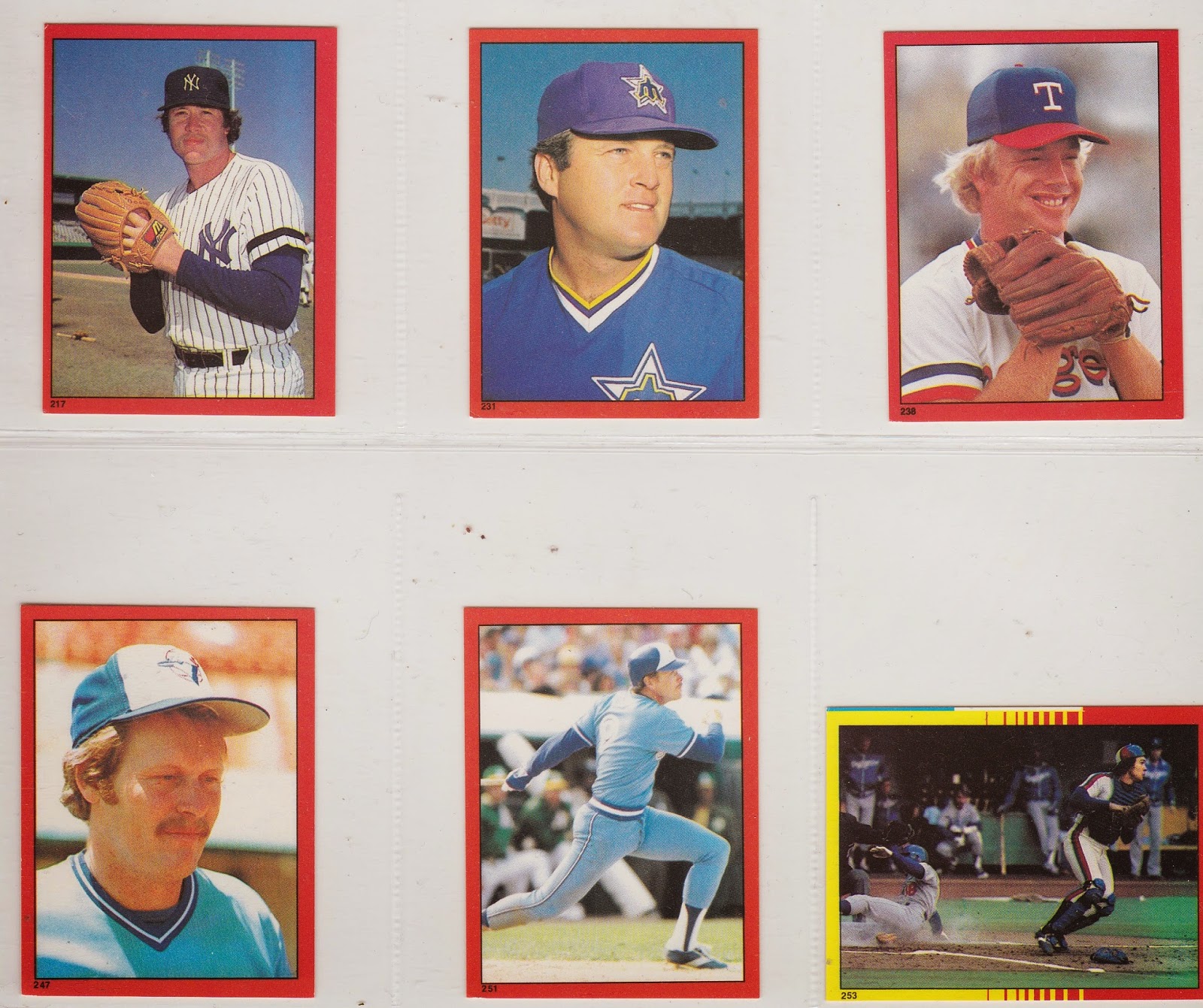 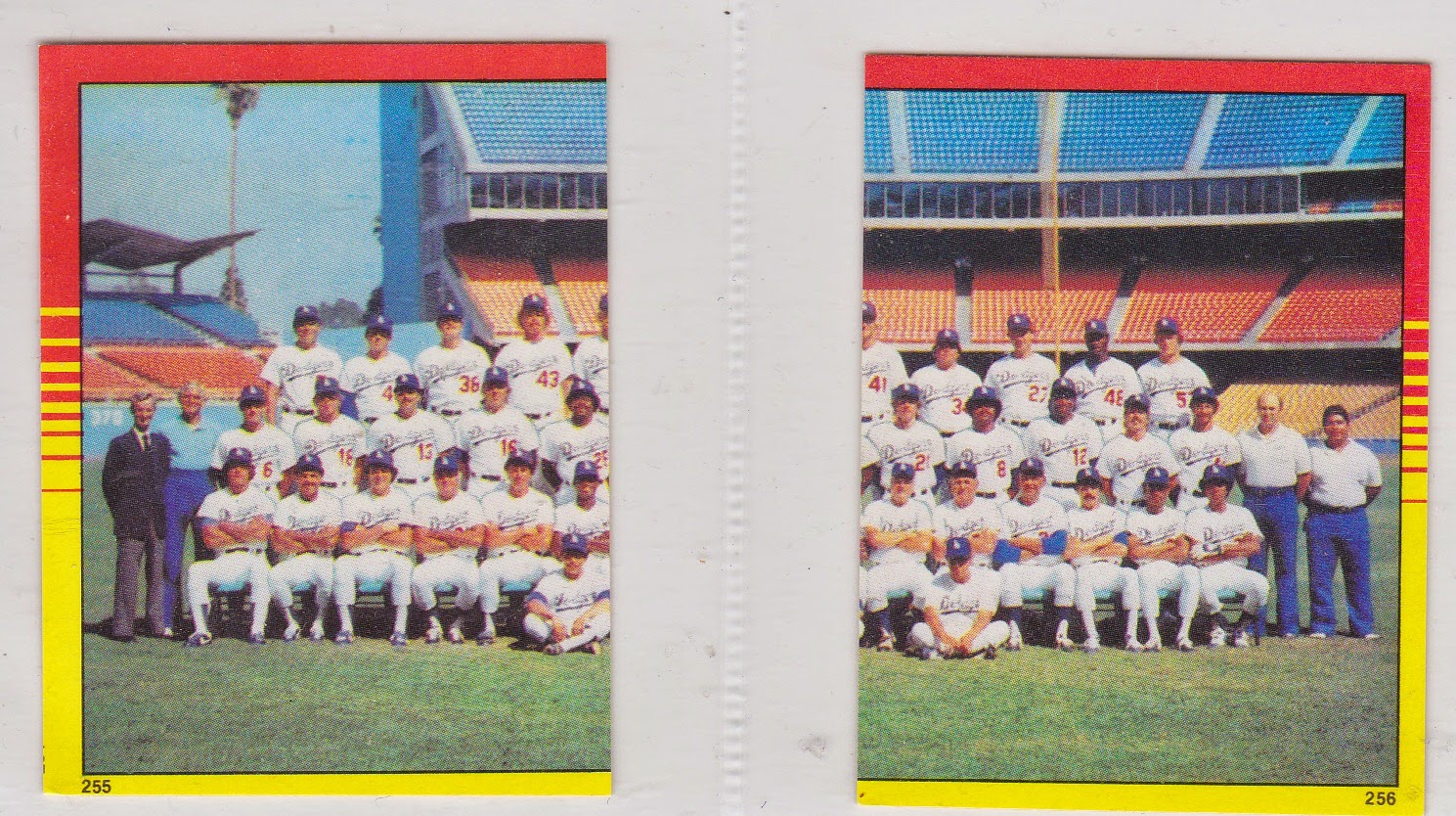 The best part is that I already have the book. 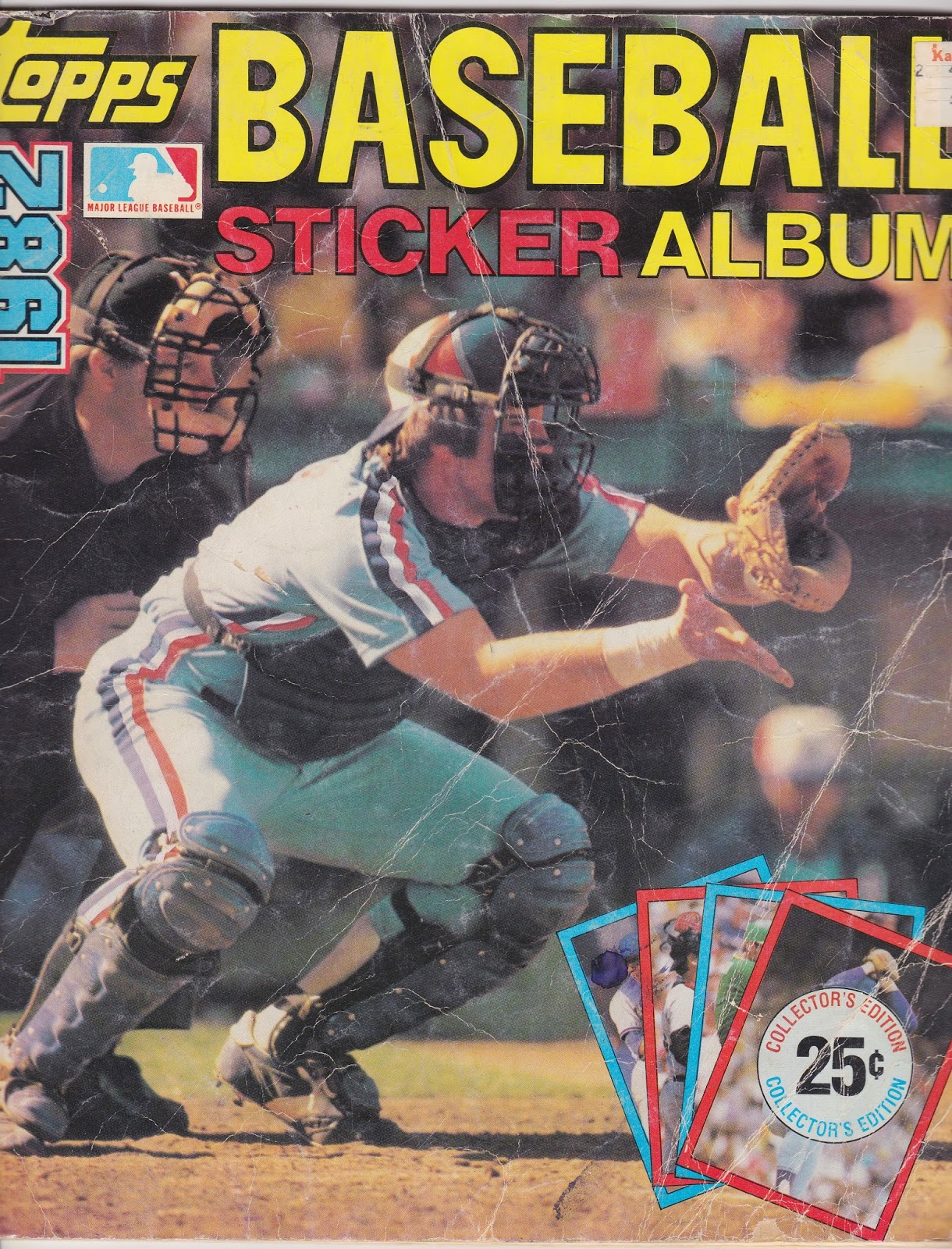 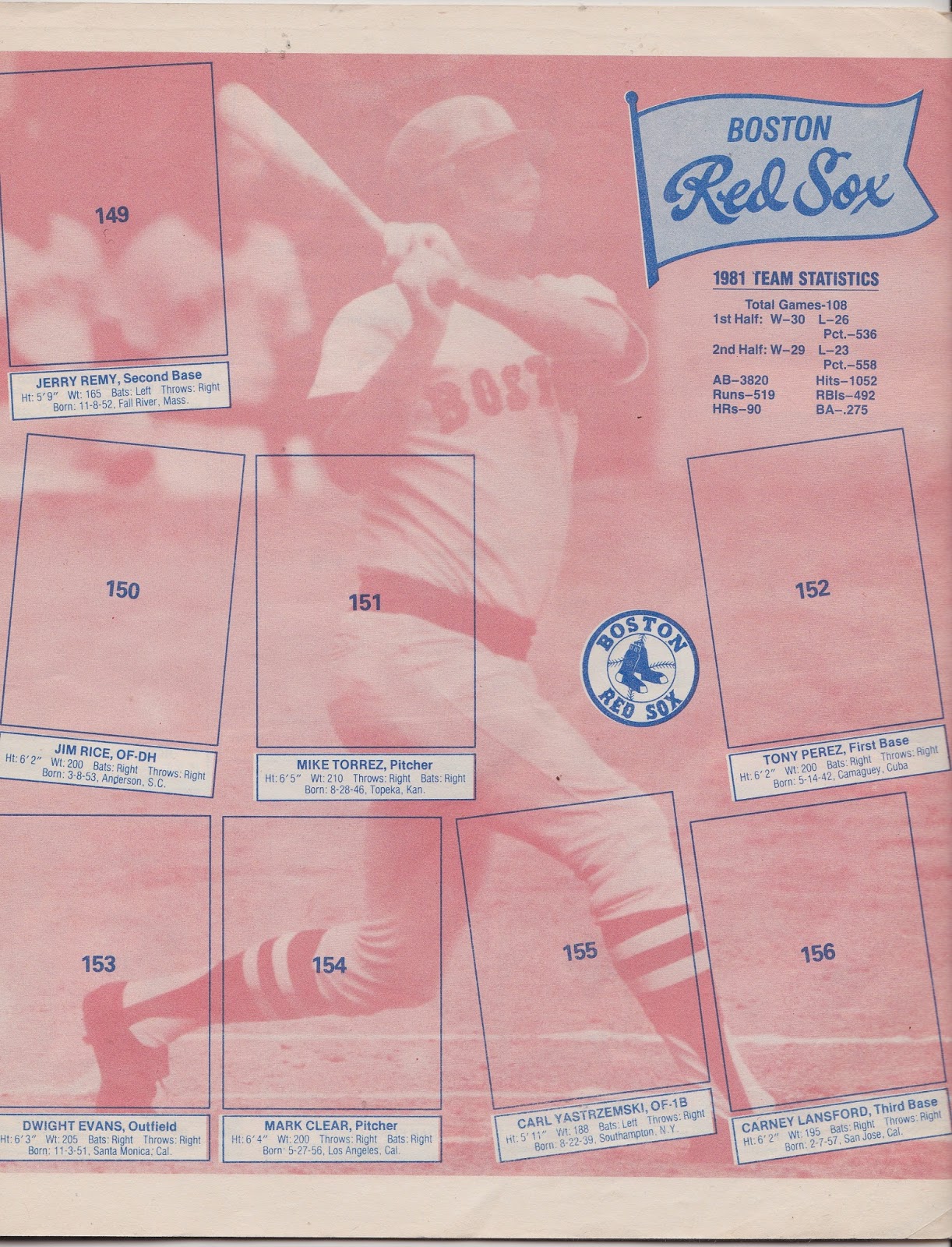 One of the cool things about these stickers is that I can do something with these that I'm not able to do with the stickers Topps released this year.


I can tell you who these players are without looking at the names on the back.

Let's take this group of nine stickers. Here are my guesses, from left to right.

How did I do? I got eight of the nine right. In center square was not Stan Bahnsen (who was actually with the Angels in 1982), but Scott Sanderson.

How do you think you would do? Take a look at these nine players. Who are they?

Comment on this post who you think these nine players are. Whoever has the most right will win a hanging pack of something. I think Topps base, Opening Day and Heritage are available in my area right now. If more than one person gets all nine correct, off to random.org we go. (Just for the record, I got all nine of these right.)

I'll keep this open for a couple of days, the contest will end at 11:59 this Saturday evening. Good luck to all, and if anybody needs me, you can find me listening to "Foreigner 4" and watching reruns of "The Greatest American Hero".
Posted by Swing And A Pop-up at 8:40 PM