Another Good Day At The Card Show

It has snowed the past three months during the day of the monthly card show, so when I woke up and saw blue skies, I was very happy. True, it's still a little on the cool side for me (you won't see me walking around in shorts and flip-flops in the middle of December, I don't understand that at all), but a nice morning for a card show.

I had planned on a bigger budget than usual ($40 instead of my usual $20), and I began with working on some set needs. I found a table that had 2015 Topps for ten cents a card. I picked up ninety of them. Right now I need twenty-four cards to complete the set. Please check my wantlist to see if you have any of them.

I also picked up fourteen cards from 2014 Topps Archives at ten cents a piece from this table as well. I didn't buy any Archives last year, but one of the monster boxes of commons that I bought recently had more than half the set in it. So what the hell, since I'm already halfway there with very minimal money spent on it, why not try to finish it?

A couple of tables had $2 autos and memorabilia cards. For Christmas a few years ago, my wife bought me one of those twenty card displays that you can hang on your wall. I've been trying to fill it with Red Sox cards, but most of those types of cards that I have are in landscape format. I wanted to fill it with cards in the portrait style so you wouldn't be looking at them sideways. 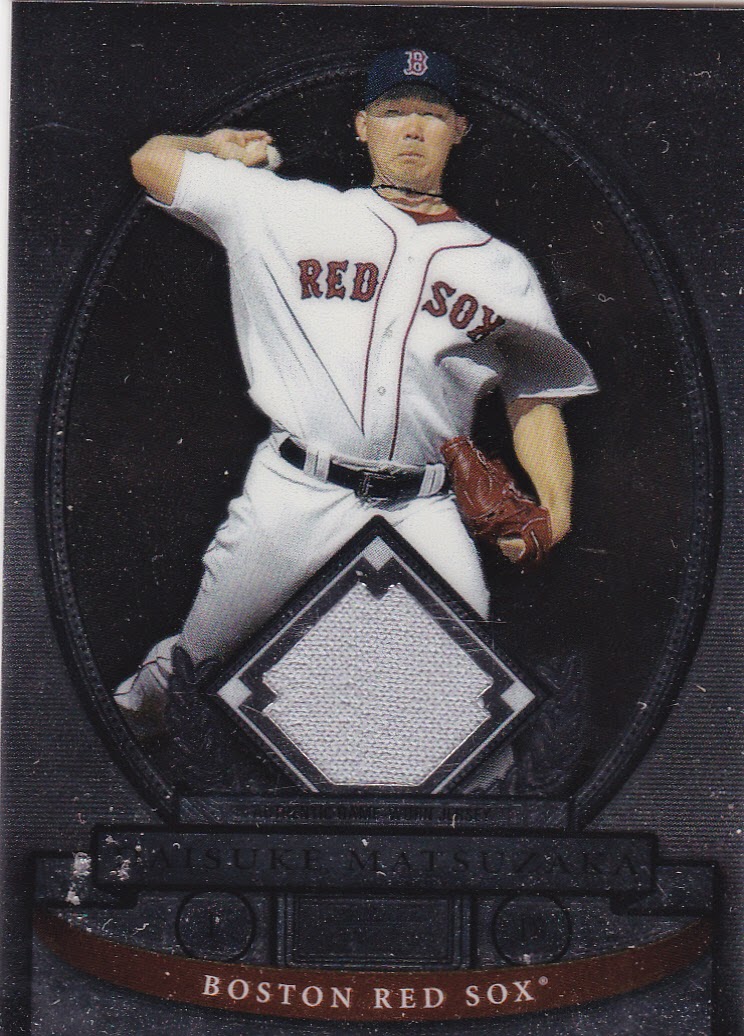 So I picked up this Dice-K jersey card from 2008 Bowman Sterling.

The rest of the time I spent at the dealer that has all of the oddballs. He wasn't there the last time I attended this show, so I was very excited to see what he had this time.

He's got a lot of the Hygrade Baseball's All-Time Greats set (that I finally made a want list for). I found five of the cards I needed. 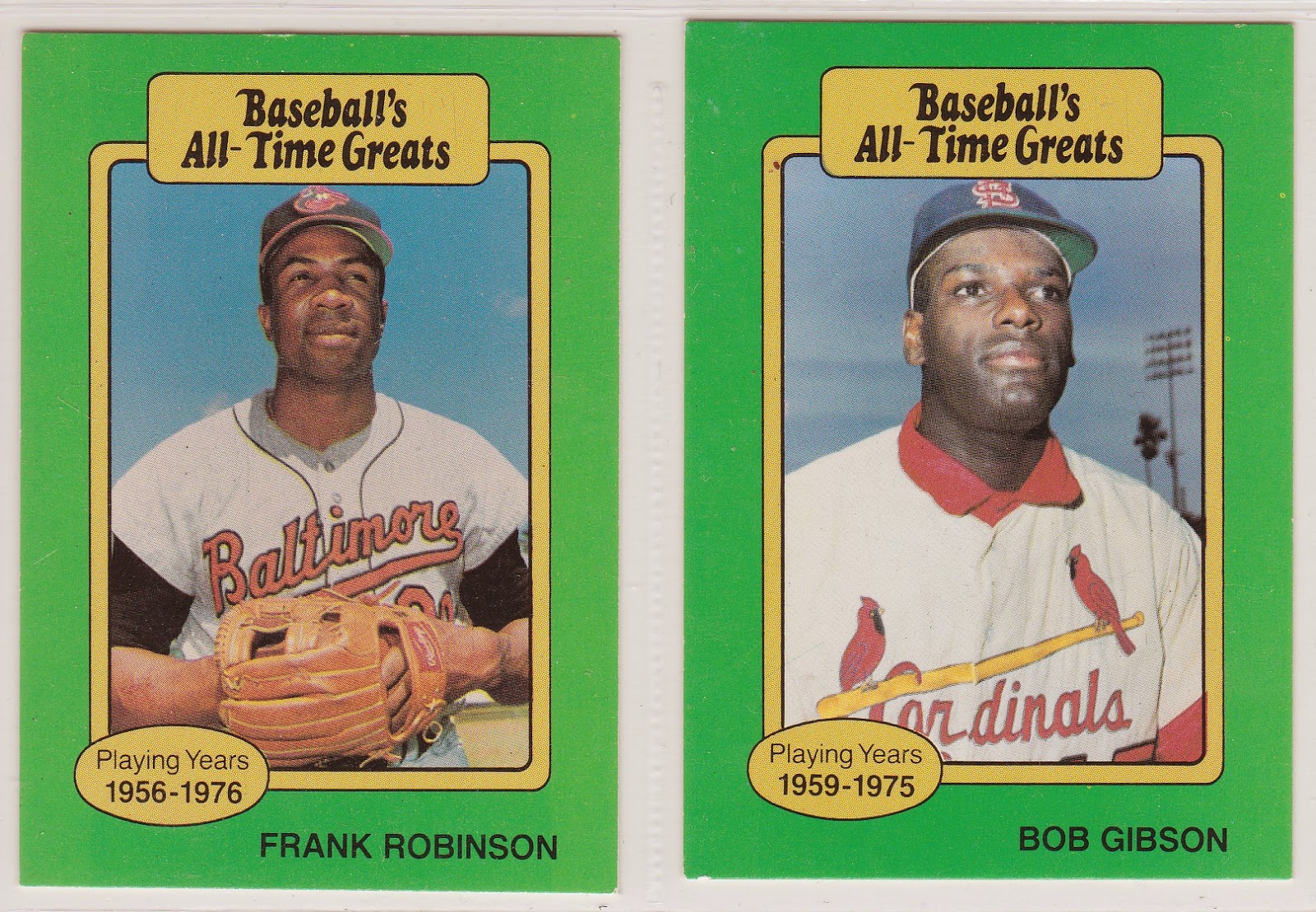 I'm actually not sure if I'm done with this set or not. The checklist that I've found lists a variation of the Jackie Robinson card and an orange Cy Young card. So maybe I'm finished with the set, maybe I'm not. 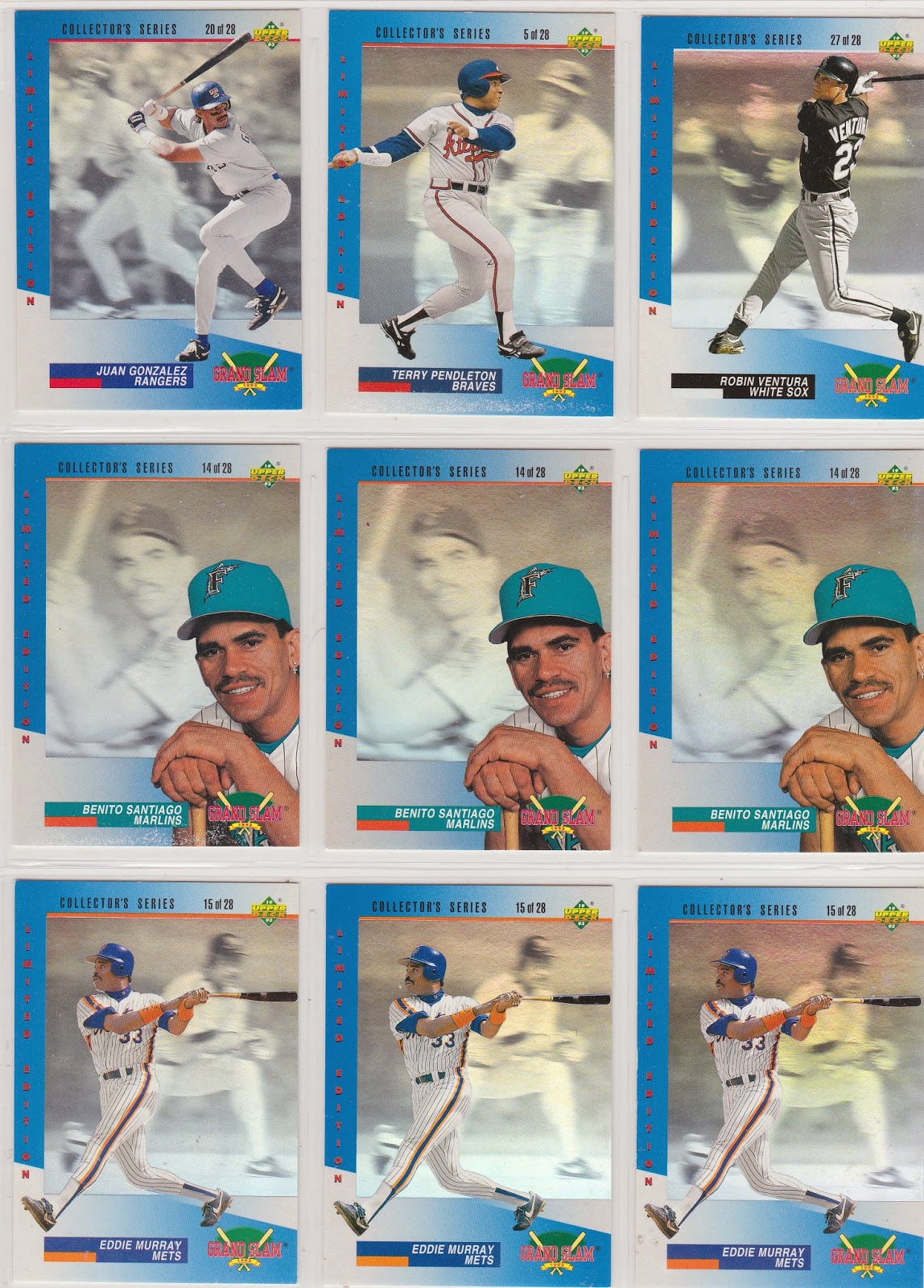 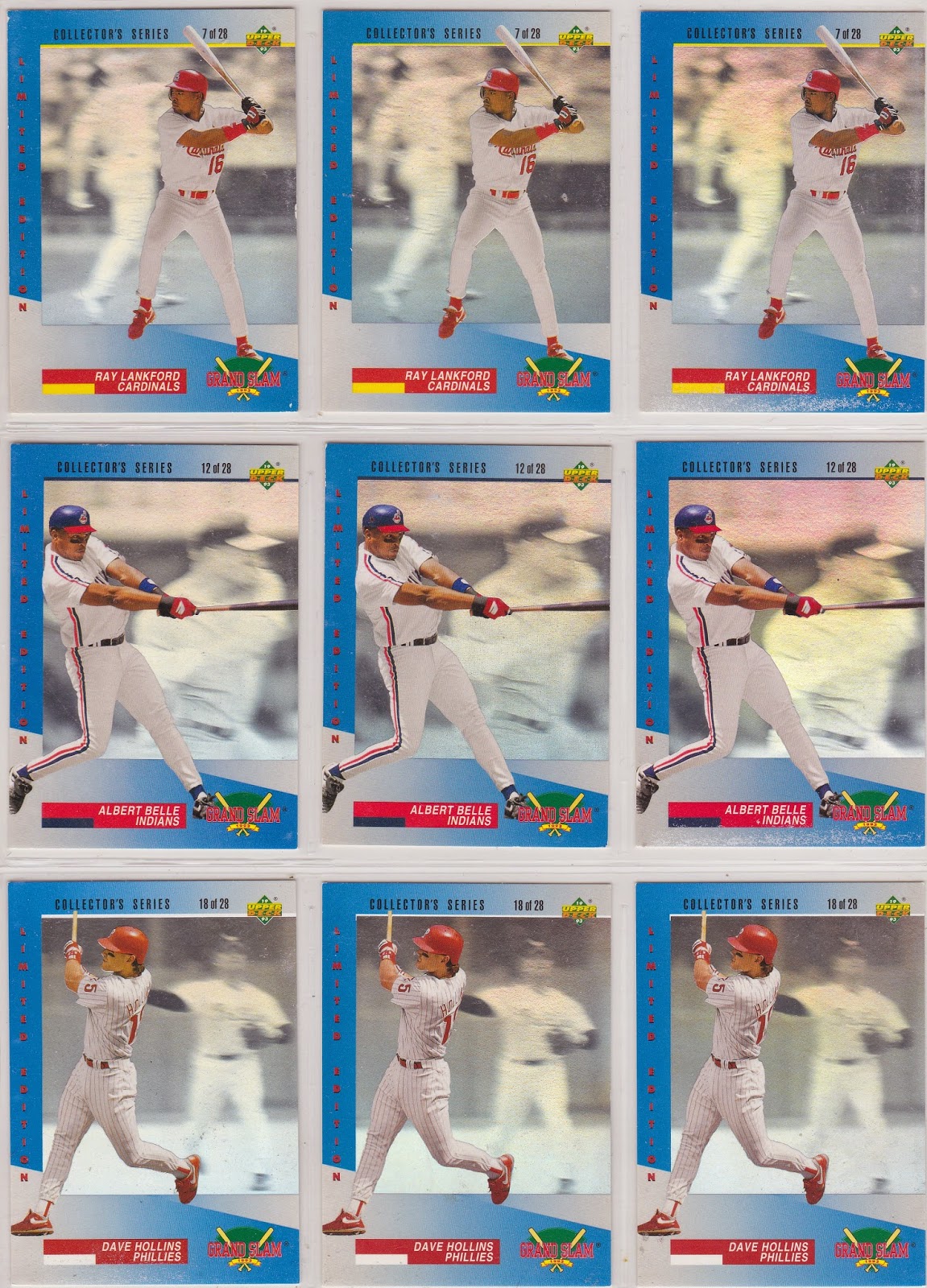 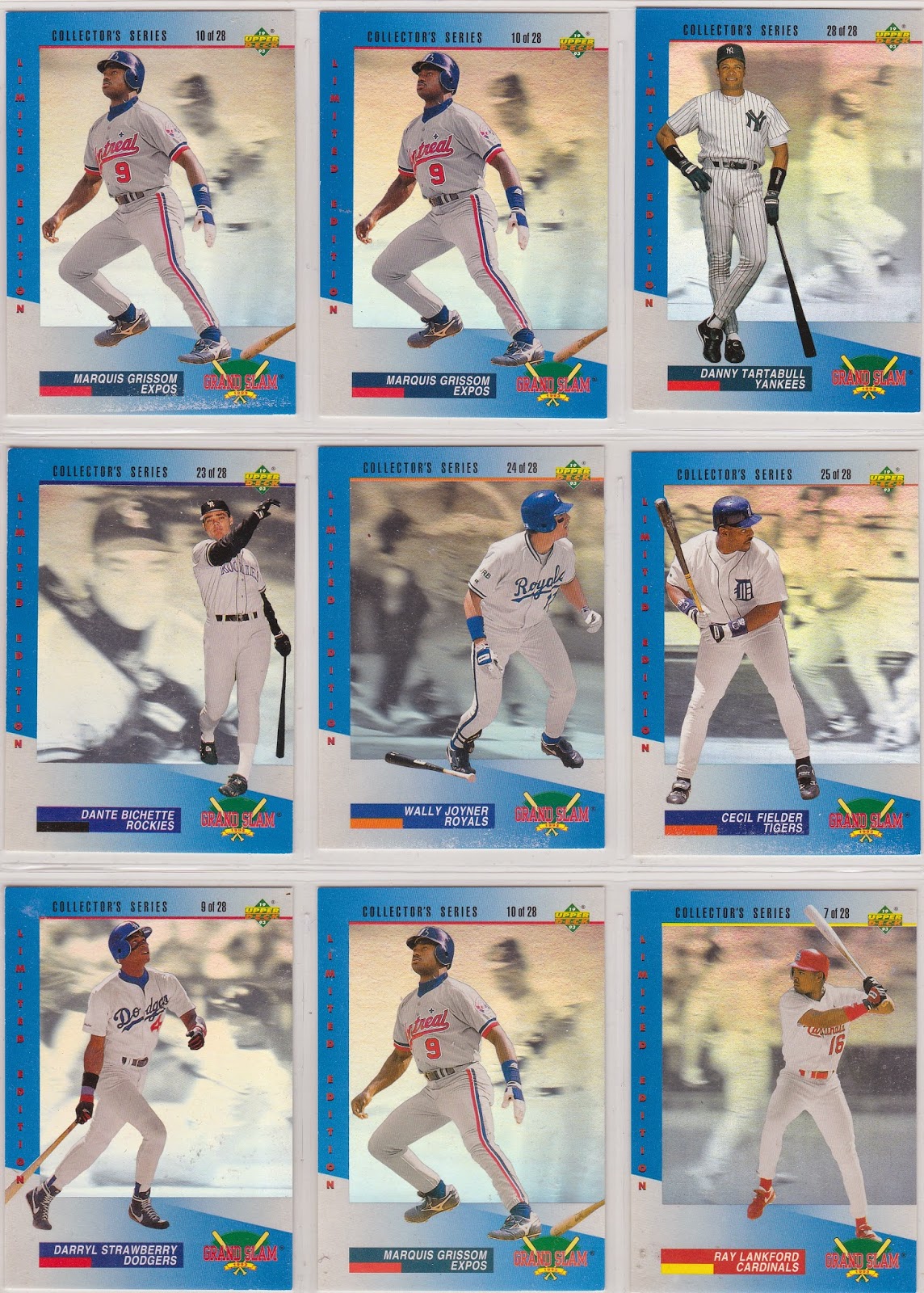 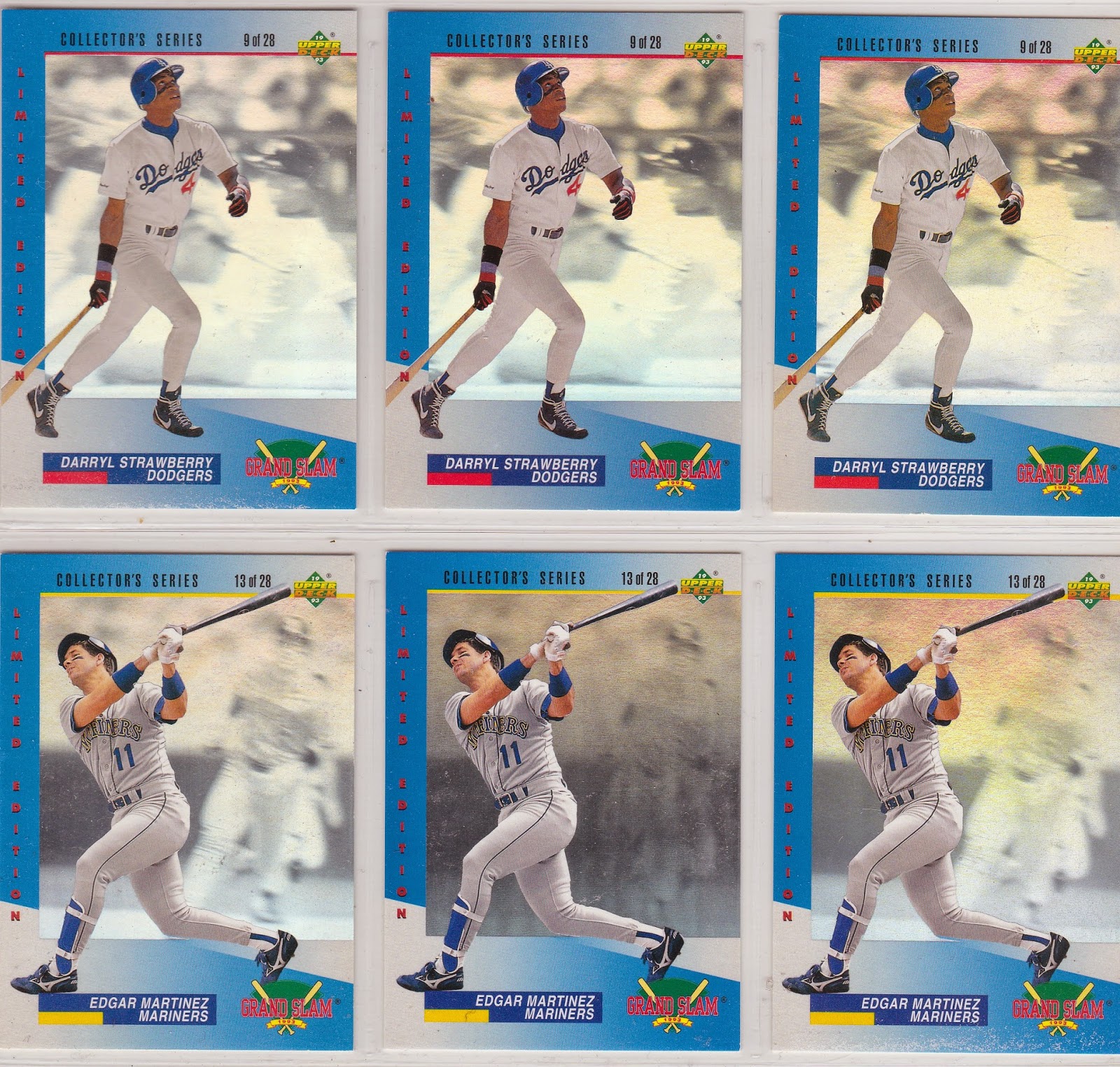 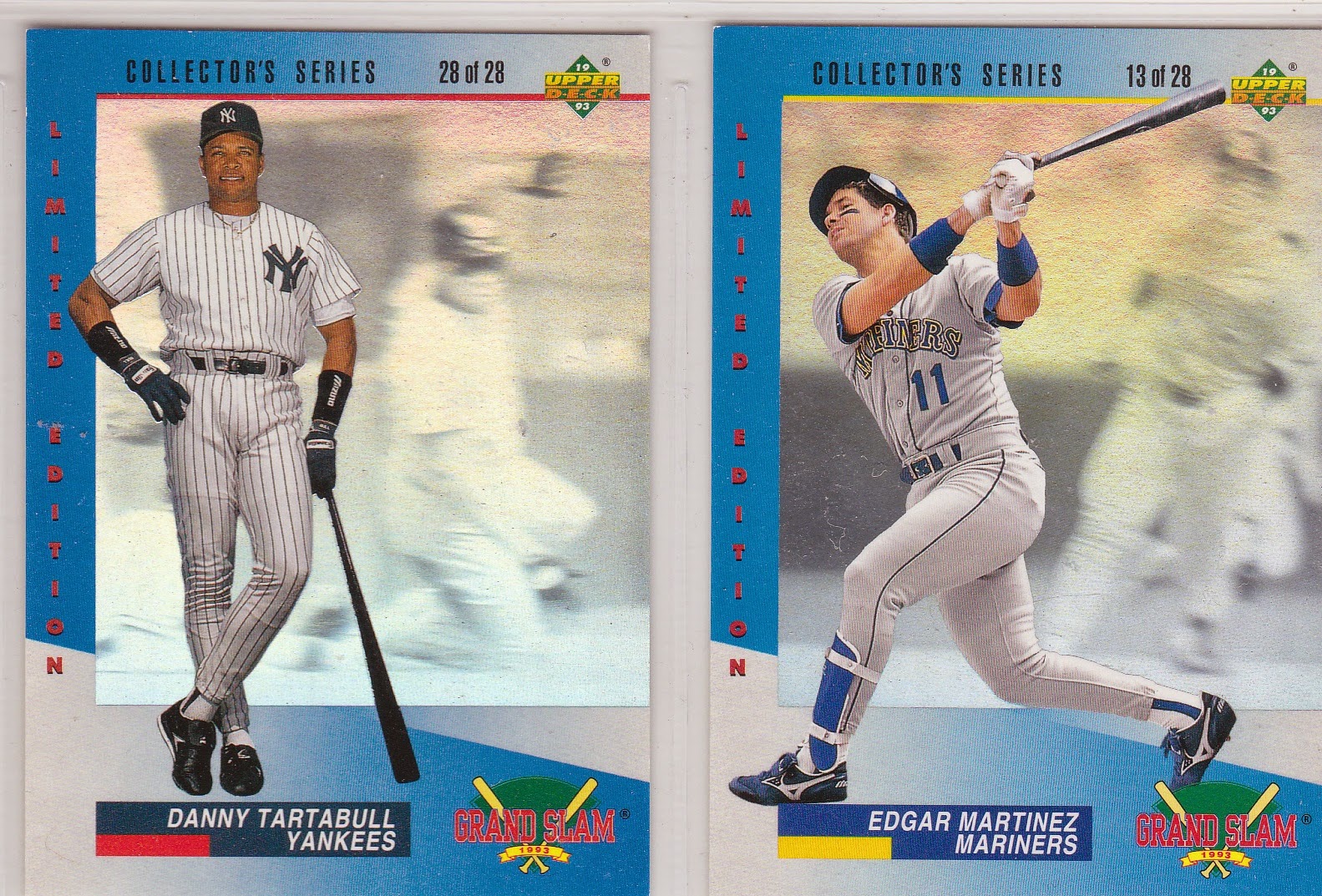 All these are from the twenty-eight card 1993 Denny's Grand Slam set. There was one player featured from each team, and you would receive one card with the purchase of a Grand Slam meal and a Coca-Cola Classic. 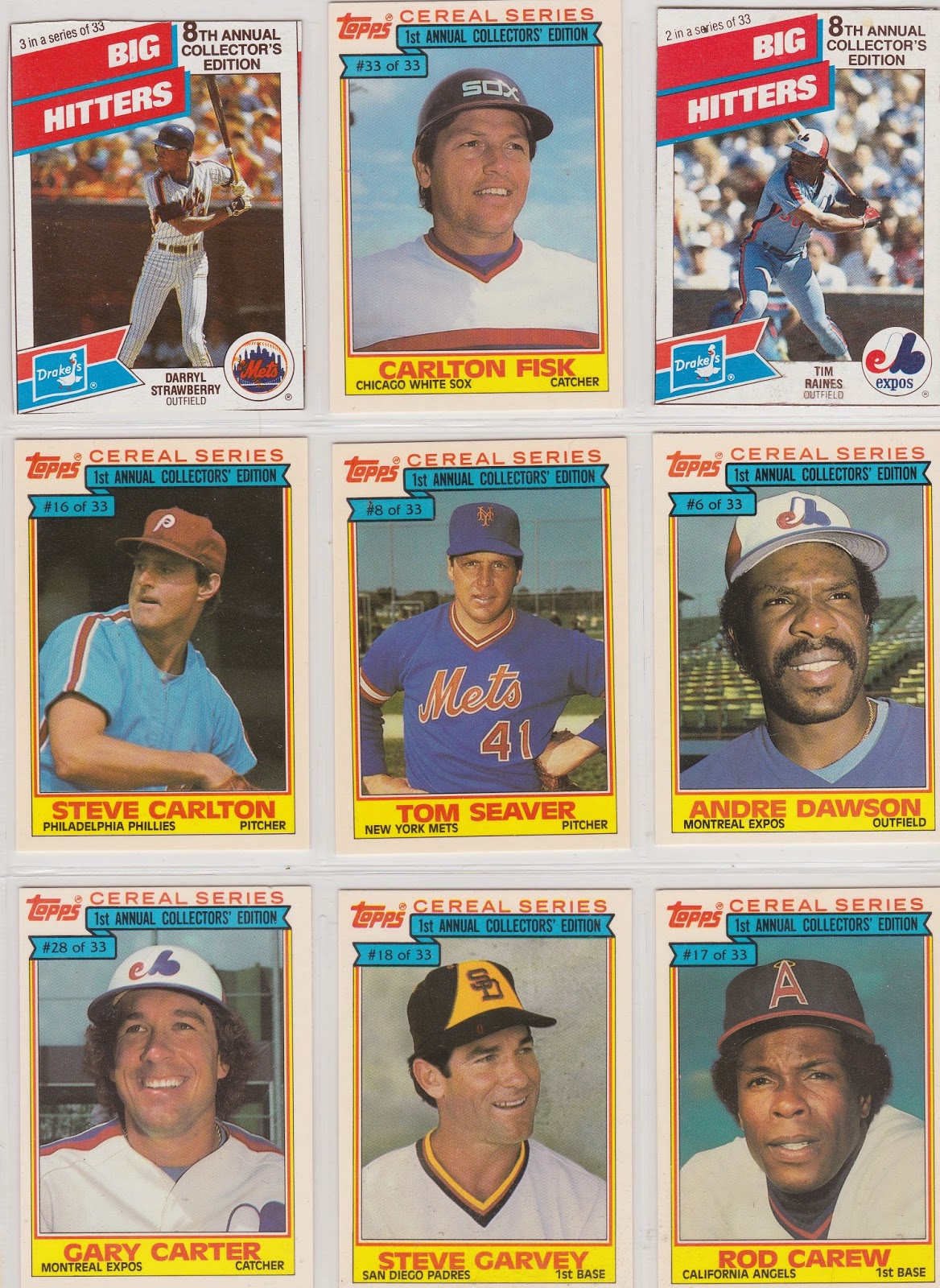 The Darryl Strawberry and Tim Raines cards are from the Drakes Big Hitters Super Pitchers set, which was released in 1988. It was a thirty-three card set and there were two cards on the box bottoms of specially marked Drake's products.

The rest of the cards in this sheet are from the 1984 Topps Cereal Series set. This set was also thirty-three cards (plus an unnumbered checklist), and could be found in boxes of Ralston Purina cereals. 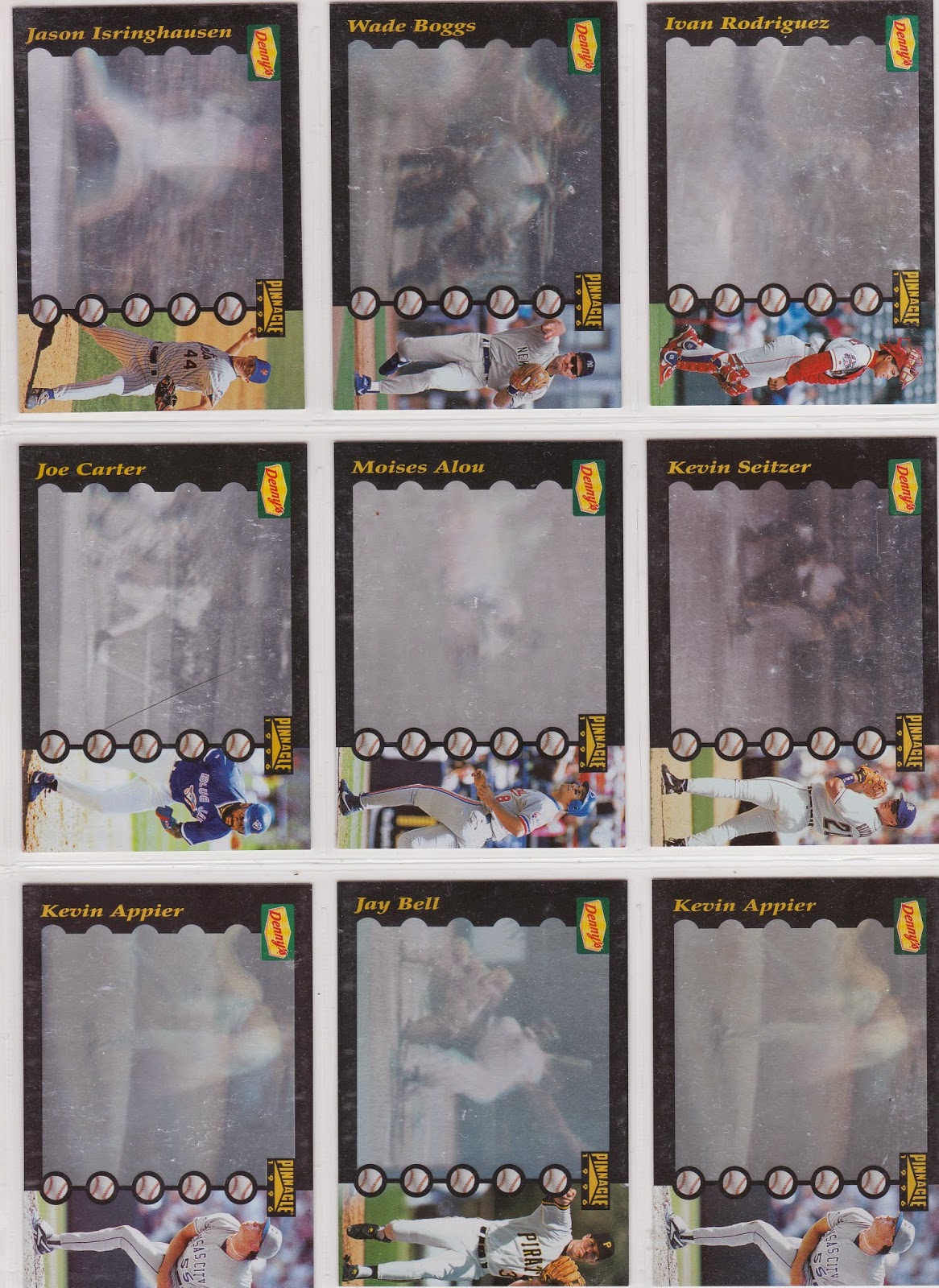 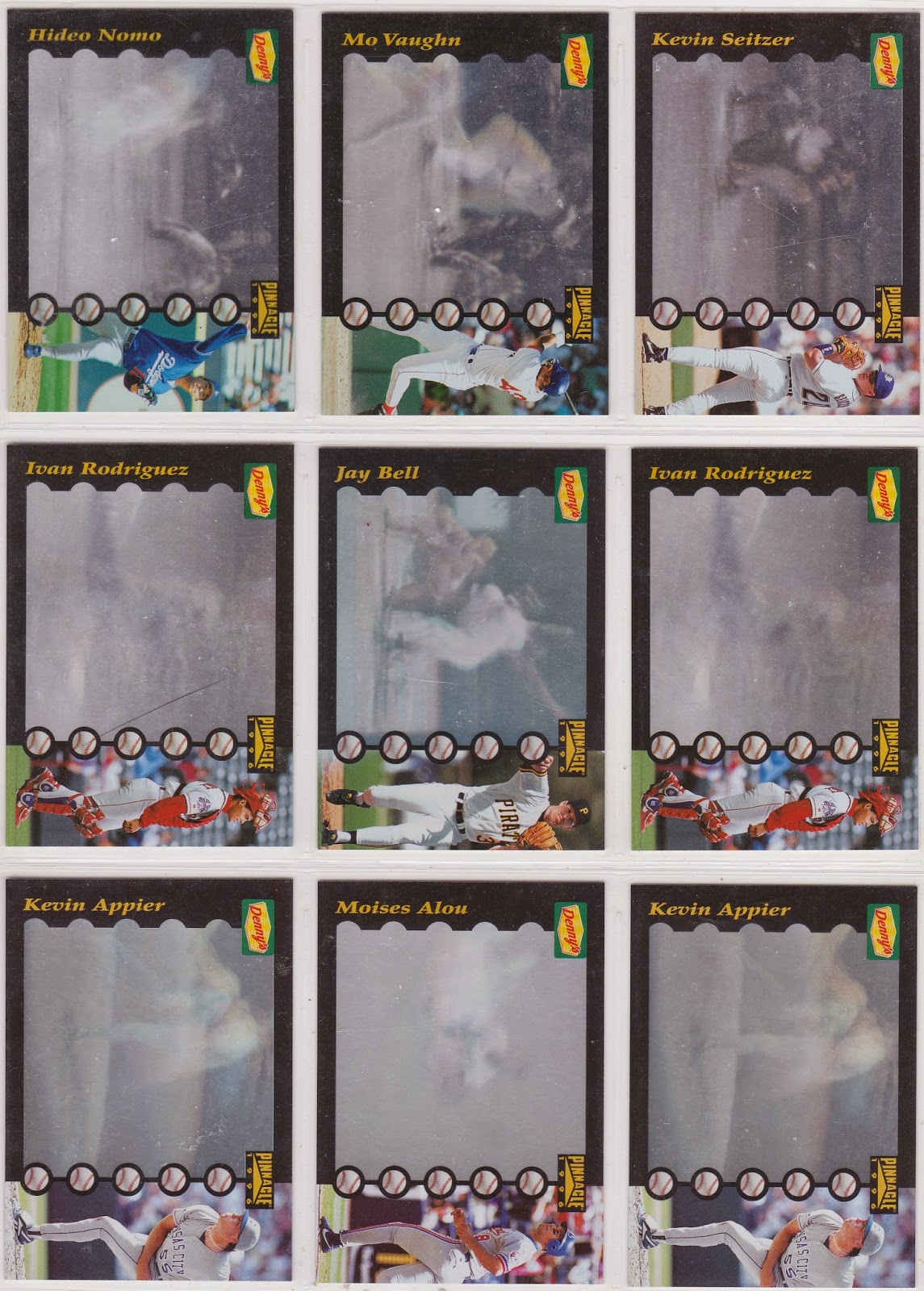 These next two sheets are from the twenty-eight card Denny's Instant Replay Full Motion Hologram set, which was issued in 1996. You're supposed to be able to move these cards at an angle and see a pitch or a swing, but quite honestly, it doesn't work all that well for me. Maybe I need the "How to View a Full Motion Hologram" card, which was included in every pack. 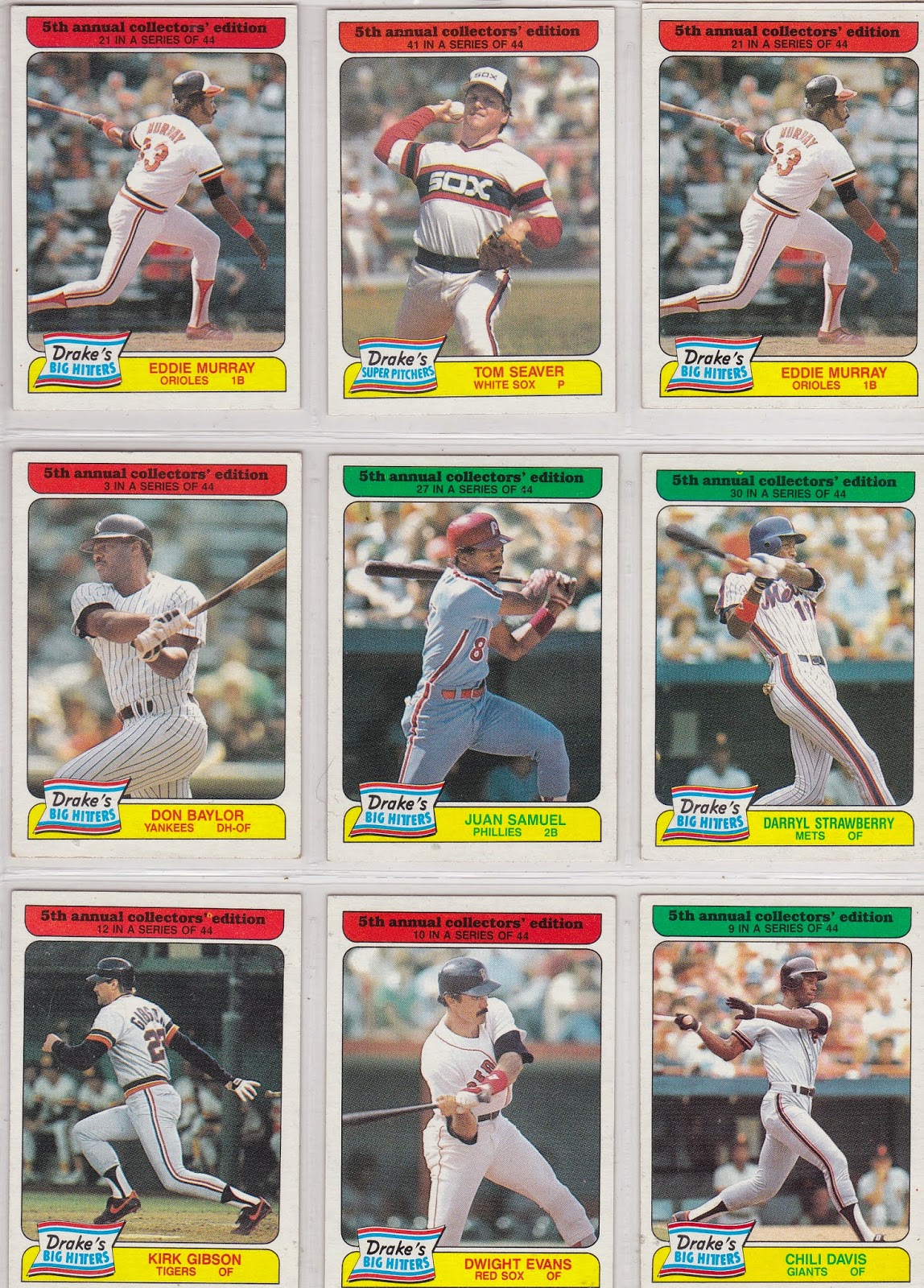 This page features cards from the 1985 Drake's set. It was a forty-four card set and like the 1988 set I featured earlier in this post, the position players were called "Big Hitters" and the pitchers were called "Super Pitchers".

I've got plenty more cards to show, but to prevent this from being a really, really long post, I'm going to split it up into two or three posts.

More oddballs to come!
Posted by Swing And A Pop-up at 2:24 PM