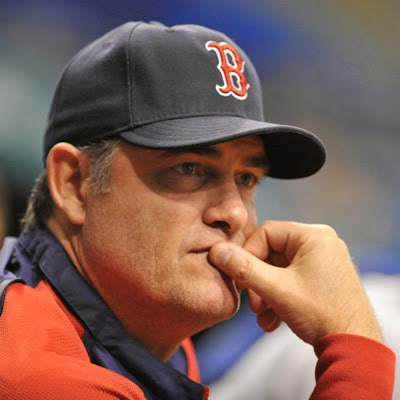 If I had told you that the Bobby Valentine - led 2012 Red Sox would have had a better record at the trading deadline than the 2014 Red Sox, would you have believed me? Was anybody thinking about the possibility of worst-to-first-to-worst?

By admitting that they are building for April 2015, the Red Sox have officially thrown in the towel for 2014. The name mentioned most in trade rumors is Jon Lester. I've heard Seattle, Baltimore and the Dodgers as possible teams interested. A couple of days ago there was a push in the Lester for Matt Kemp rumor, which thankfully has died down somewhat. It has been reported that if he is traded, Lester has said that he wants to sign back with the Red Sox for the 2015 season, although my opinion is once he's gone, he's gone. The Red Sox are reportedly shopping John Lackey as well.

Utililtyman Mike Carp has asked for a trade. Pitcher Felix Doubront has said he does not want to be in the bullpen and is unhappy. There have also been trade rumors involving Andrew Miller, Stephen Drew and Johnny Gomes.

Since June 18th, the Red Sox have released Grady Sizemore, Chris Capuano, A.J. Pierzynski and traded Jake Peavy. I predicted in May that the team we would see in late August would be much different that the team we were seeing at the time. It looks like even though I was wrong on what players would be different, let's hope it's not August and September 2012 all over again.
Posted by Swing And A Pop-up at 9:22 PM