What A Difference Thirty-Five Years Makes

Well, the Red Sox have reached the World Series again. It seems since 2001, every year one of the four Boston teams (Red Sox, Patriots, Bruins or Celtics) reaches the finals for their sport. This is quite a difference from decades past where not only did Boston teams not reach the finals, if they did, they lost in some horrifying fashion.

Now we expect Boston teams to not only be competitive, we expect them to win.

That's why last year was so brutal as a Red Sox fan.

It's easy to get spoiled by all of the success, but if you were a Red Sox fan growing up during the 70's, 80's and 90's, the post season was mostly for watching other teams play.

But what a difference thirty-five years makes.

Back then David Ortiz probably would have fouled out to the third baseman.

Any maybe today Yaz would have hit a home run. 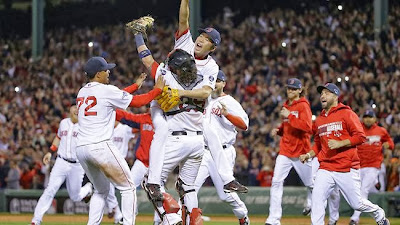