Introduction To Verbal Reasoning...(Sort Of)

When you reach your 40's, most often your career path has been pretty much determined. Both my parents at this age were pretty much working in the same field they were when they were in their 20's. Not so much the same job, but the same field. My dad was in the military, and my mom was the town librarian (then she became the librarian at an elementary school).

However in today's world, this is no longer the case. At this point in my life, I don't really have a career, I have two part-time jobs that pay the bills. So to try to better my situation, I've begun studying for the GRE (Graduate Record Examination). In a nutshell, it'll let me know whether or not I'm cut out for graduate studies.

If you haven't done any academic work in some time (like in my case), it can be quite a shock to your system. Both my jobs require very little brain activity, so there isn't much complex thinking happening.

One of the key components to this test is what is called "Verbal Reasoning", which is the ability to analyze the relationships between words and sentences as they are used in context. (I will relate this to baseball cards, don't worry.) One of my problems is that I read too fast, occasionally missing important details or thinking something was there when it actually wasn't.

Needless to say, my first practice test wasn't too impressive. Eighteen wrong out of sixty questions.

So how does this relate to baseball cards, you ask? Well, I won a Listia auction some time back. As usual, I read the listing really quickly and I could have sworn it said free shipping. I was so excited to see a lot of nine 1982 Fleer Cards with such a low bid that I did not "analyze the relationship between the lack of words that were not used in context", or something like that. Nor did I even check to see if I even needed them. 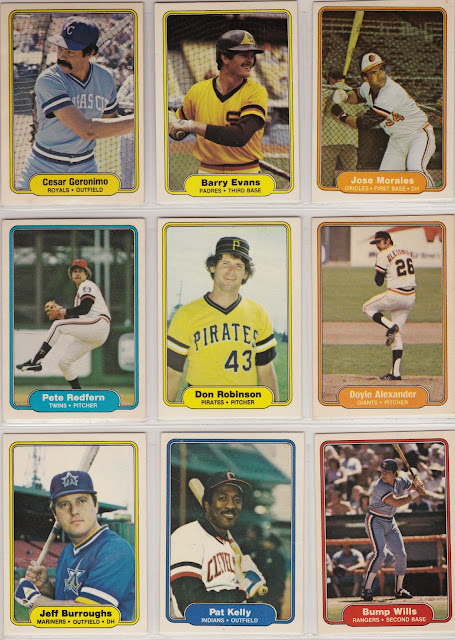 Turns out I needed four of them.
I'll take it.
But next time I'll analyze the relationship between.....
Never mind, it's cards. I want 'em.
Posted by Swing And A Pop-up at 9:57 PM