Four out of the five cards on this countdown have some sort of humorous or feel-good type of background behind it. This card however, has a different reason for it being so important to me. 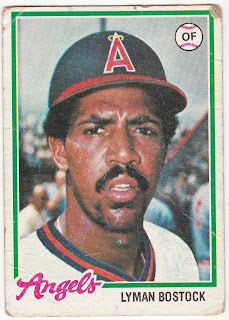 Lyman Bostock was an outfielder for the California Angels in 1978. Prior that season he had signed a 5 year, 2.25 million contract with the Angels which back in 1978 was one of the most lucrative contracts for a baseball player. He was coming off of a strong 1977 season while with the Minnesota Twins, where he finished second only to teammate Rod Carew for the batting title. So even though at the time I didn't know who he was, he was beginning to put together quite the resume.

Now I don't remember ever seeing him play. Red Sox games were on channel 38 in my area, which was UHF. That meant it came in very crappy on my TV, so I spent a lot of time listening to games on the radio while laying in bed or looking at my cards. In fact I think the first footage that I've seen of him play, I just watched a few minutes ago on YouTube.

Of course you probably all know he was tragically killed in September of 1978. But for me, he was the first player I had a baseball card of who was not alive anymore. I remember staring at the card, not being able to process the fact that this man was dead. Baseball players were superheroes to me, they didn't die. My aunt had died the year before, but I could comprehend that. She was old. Really old. And in a nursing home with lots of other old people.

As I got older I realized dying wasn't just for old people. Many active players had died previously and many have died after. But the passing of Mr. Bostock has had an effect on me that no other tragic figure has.

And the card you see above is the very same card I used to stare at when I was a child.

I promise, the rest of the countdown will much happier.