One of the things that I enjoy reading on other blogs are the "countdown" posts, where someone lists their favorite or not-so-favorite cards, sets, etc. I figured it was about time I did one of my own.

So here are the "Top 5 Influential Cards Of All Time (To Me)" countdown. These are the five cards that bring back the most memories of my childhood collecting era. So all five will be between the late 70's - early 80's which was when I collected initially.

One of the reason I enjoy reading other bloggers countdowns is the reason the card is special to them. I can guarantee that my reason for liking any of these five cards will be different than any of yours (that's assuming that you a fondness for that particular card as well).

So the questions that you are probably not asking (but will get the answers to anyways) are:


How is a 1977 Topps Pete Broberg influential?
And how the hell is it number five? 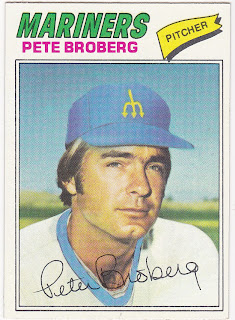 Here's the front of the card. This was the Mariners inagural year and at the time I had no idea who Pete Broberg was. 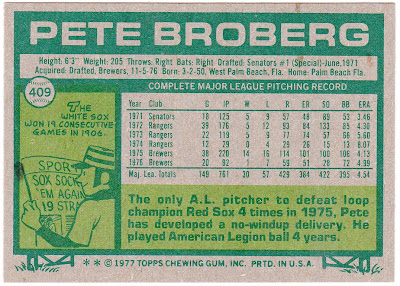 You can see that he was drafted from the Brewers by the Mariners on November 5th, 1976. He also was the only A.L. pitcher to defeat the Red Sox four times in 1975 (I love how they are called the "loop champion"). That part's depressing, but not the reason it's influential. 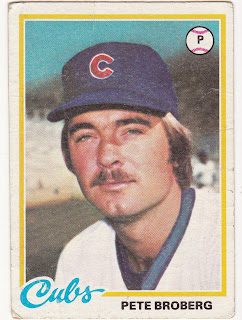 Now here is his 1978 Topps card. Note that he is now with the Cubs. 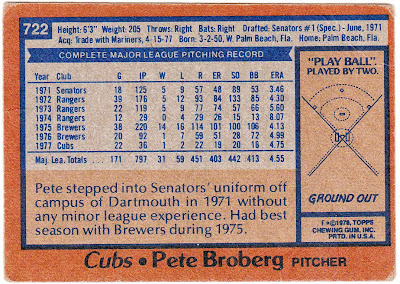 Now look at the back of the card. In 1977 he was with the Cubs. I thought he was with the Mariners! How did Topps get a picture of him with the Mariners when he never played for them?
Now in 1978 I am nine years old. There is no internet, so I cannot go to baseball-reference.com and find out what happened. I don't remember if I glossed over the information at the top of the card that he was traded to the Cubs in April of 1977 or not, but for years I had no idea how that 1977 Topps card was possible.
The answer of course, is that Topps airbrushed the card. I'm sure the original photo had him in his Milwaukee Brewers uniform, but when I was a child I had no concept of what airbrushing was. I also had no older brother to tell me I was an idiot and inform me the card was not as it seemed. I did have two younger brothers who were more than qualified to call me an idiot, but they didn't know what airbrushing was either.
Now some of you may feel that there was a bit of empty space inside my head when I was a child.
Let me confirm such accusations.
I also thought that because some players had "On Disabled List" instead of stats for a particular season, that there was a card in the set that featured a list of all the disabled players.
I wish I was joking about that.
That's why I love these late 70's sets. Every time I see Pete Broberg and his fake hat, I feel like I am eight years old again. Fun stuff (for me).