Getting My Monthly Oddball Fix (Part 3)

This is the third and final installment of the cards I picked up at the last card show I went to. 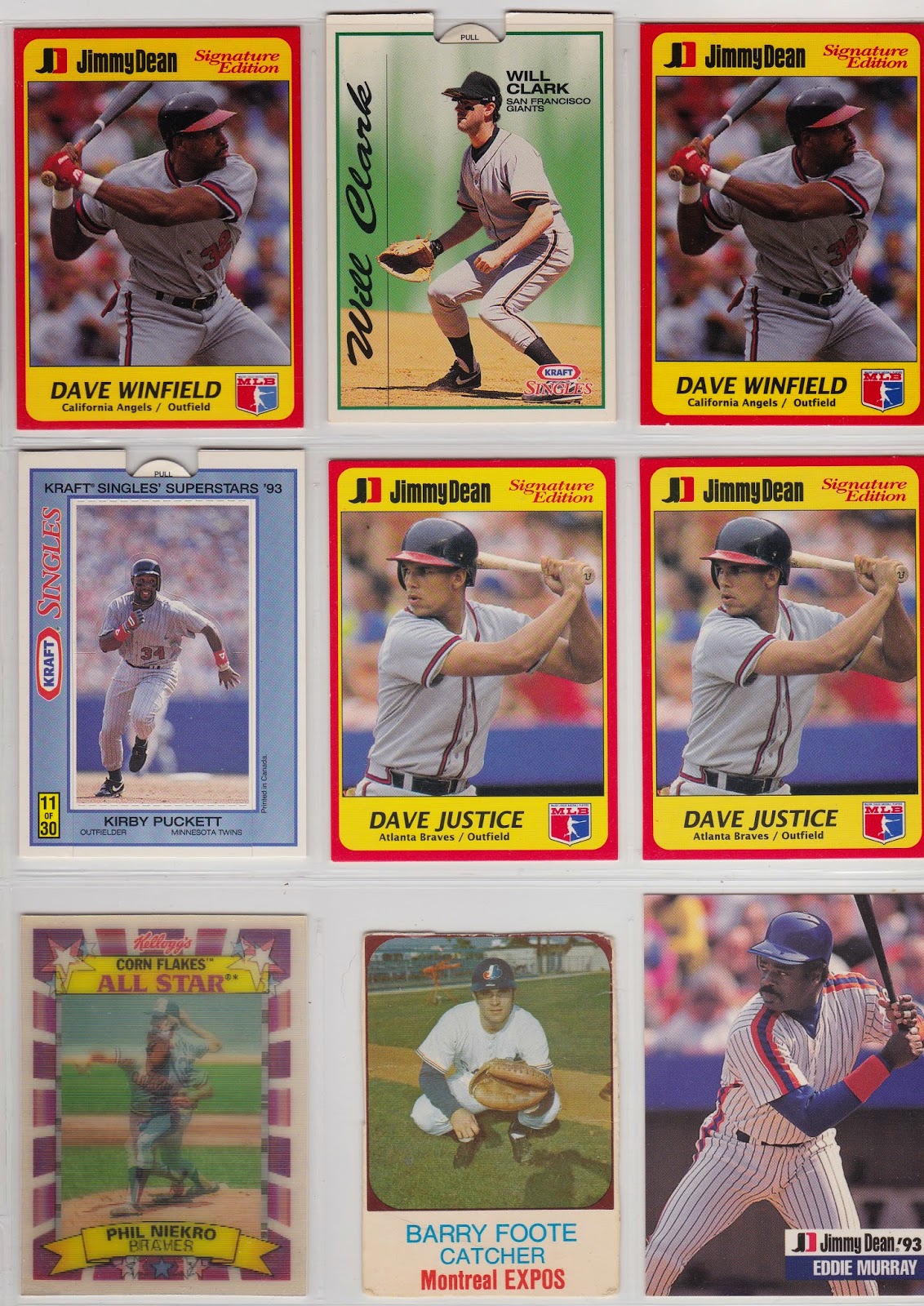 The Dave Winfield and Dave Justice cards are from the 1991 Jimmy Dean Signature Edition twenty-five card set. It was produced by Michael Schechter Associates, and in addition to the cards being available in packages of Jimmy Dean Sausage, you could receive uncut sheets through a mail-in offer.

The Andy Van Slyke and Kirby Puckett cards are from the thirty card 1993 Kraft Singles Superstars set. Individual cards were inserted into packages of Kraft Singles. They are not your typical baseball cards as these are "pop-up" cards.

I don't have any dupes of these cards yet, so I'm not going to pop one open right now (of the Kraft cards that is). I did quickly search in vain for an image of one of these opened up. Like the Jimmy Dean cards, you could get a complete set by a mail-in offer. Each league had fifteen cards, the American League cards were blue and the National League cards were green.

The Phil Niekro is from the 1992 Kellogg's Corn Flakes All Star set. It was a ten card set which used the Sportflics technology (the company was credited on the back of the cards). 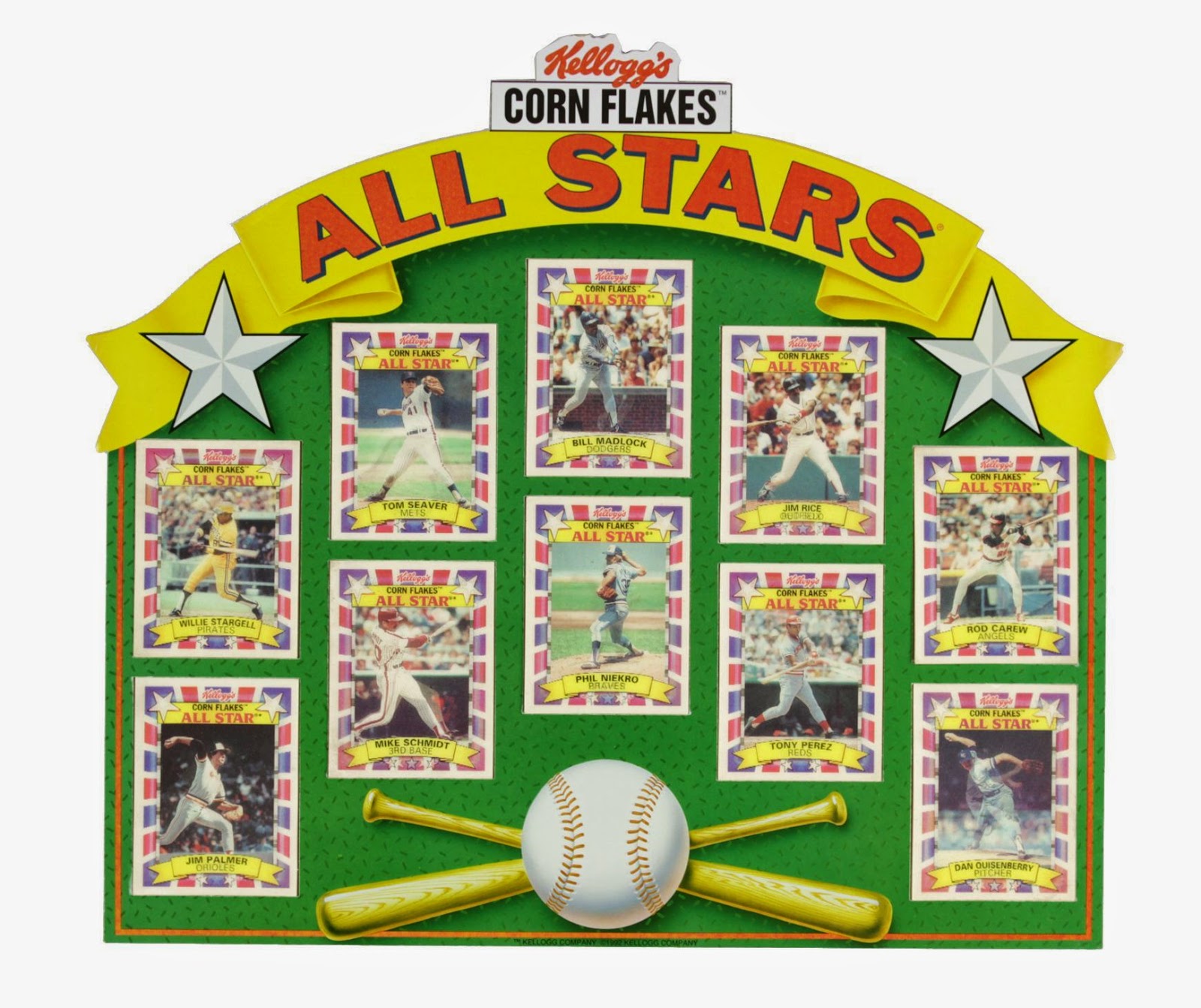 A cardboard display was also available.

The Barry Foote is from one of my most favorite types of oddballs...the Hostess sets of the 1970's. This one is from the 1975 set, which consisted of one hundred and fifty cards and were found in panels of three on the bottom of boxes of Hostess products.

The last card in this panel is a 1993 Jimmy Dean Eddie Murray. Also produced by Michael Schechter Associates, this varied from the 1991 series as it was a twenty-eight card set, but only eighteen were available in packages of Jimmy Dean Sausage products. You could only obtain the other ten by...wait for it....the dreaded mail-order offer. 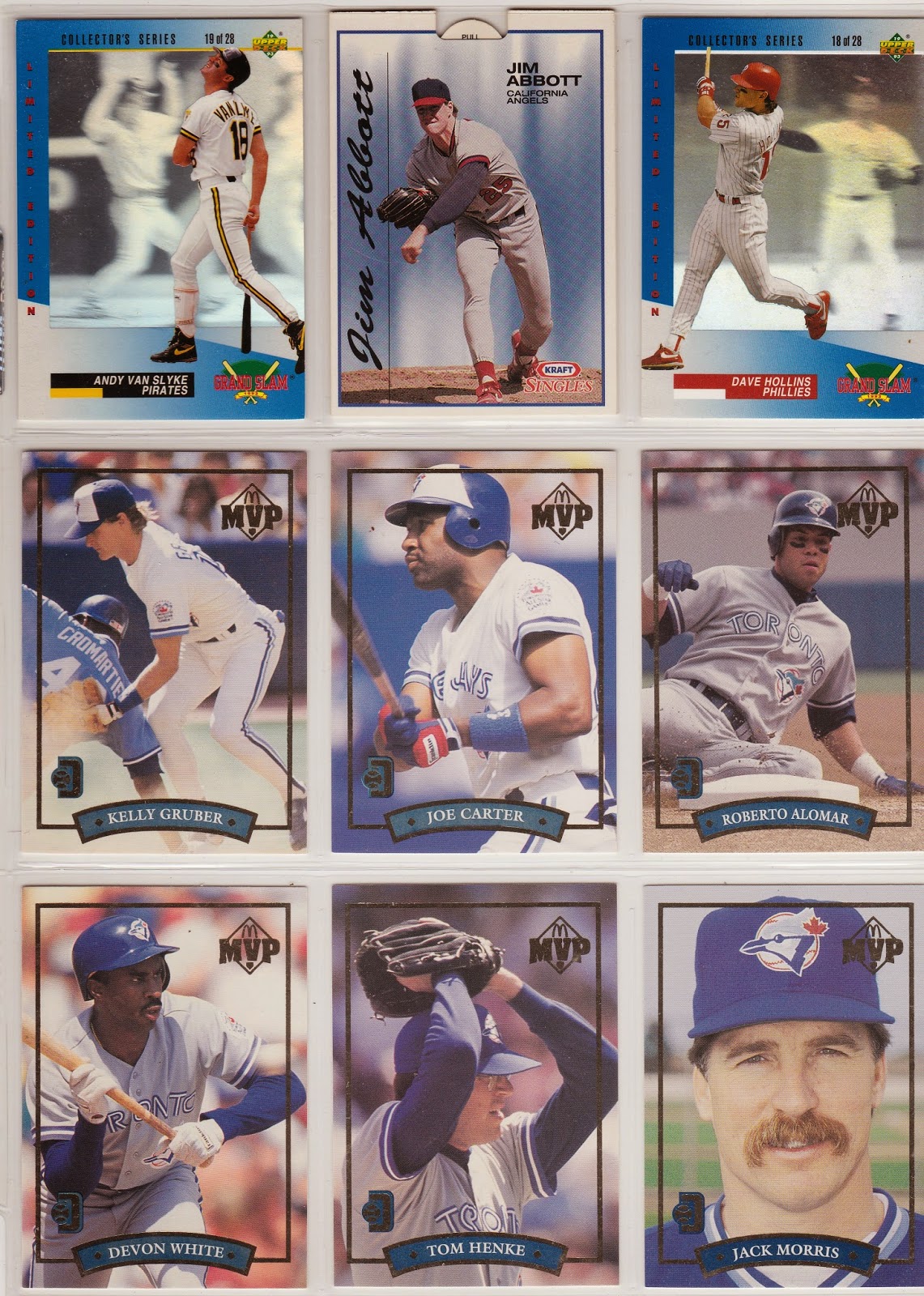 The Jim Abbott is from the previously mentioned 1993 Kraft Singles Superstars set.

The remaining six cards are from the 1992 Donruss McDonalds set. There were thirty-three cards; twenty-six base cards, six "gold" cards and one checklist. These are all six of the "gold" cards. They were only available for purchase at McDonalds in the Toronto area, and for thirty-nine cents plus the purchase of a breakfast sandwich or breakfast entree, you could get a pack of four cards. 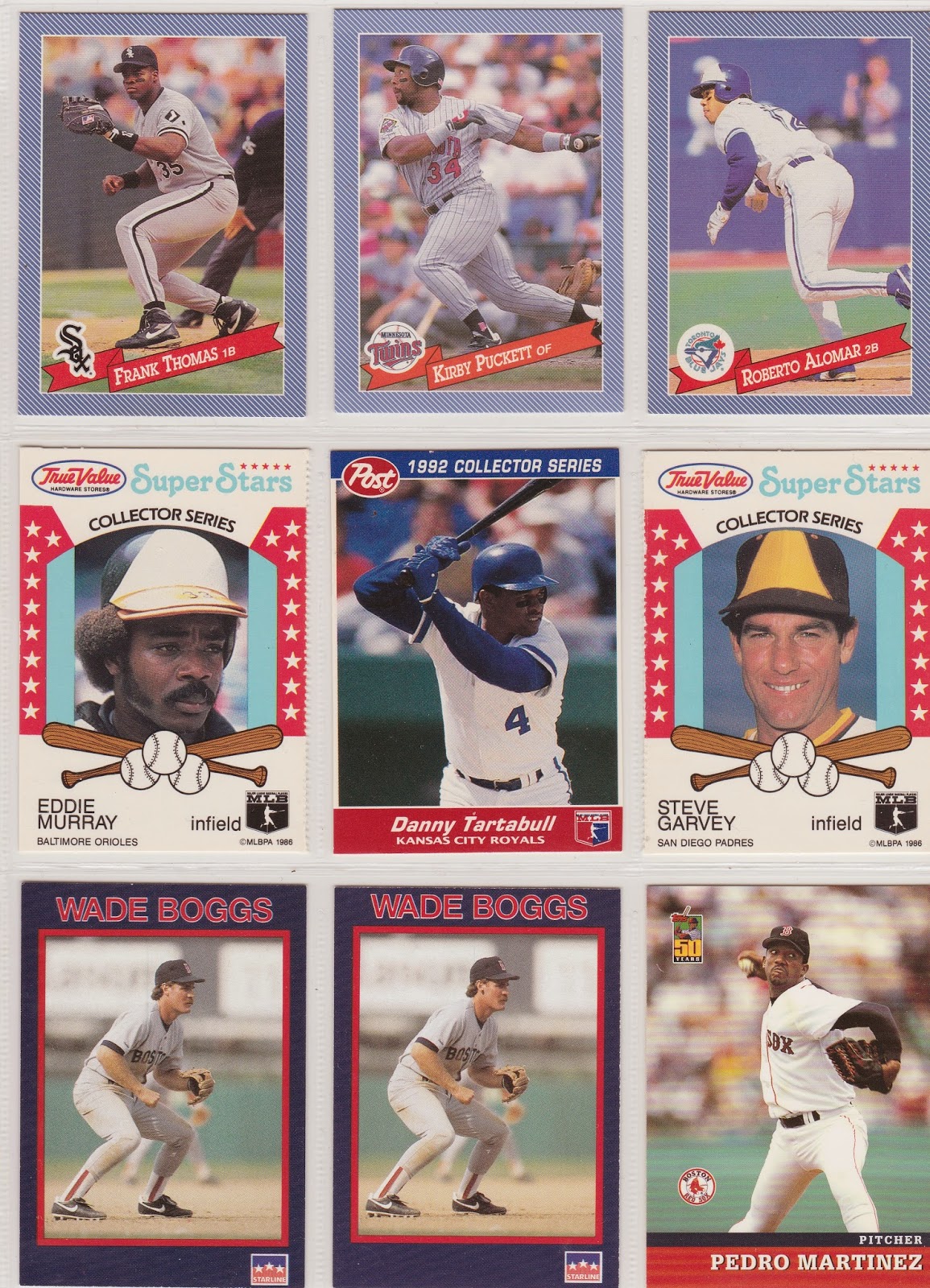 The top 3 cards are from a set I've featured occassionaly on my blog, the 1993 Hostess Baseballs set. It was a thirty-two card set and you would get a pack of three cards when you bought a package of Hostess Baseballs snack cakes. It was released in two series of sixteen cards each. As I've mentioned before, I ate a lot of those cakes during 1993.

The Eddie Murray and Steve Garvey are from the 1986 True Value Super Stars set which consisted of thirty cards. They were issued in three card packets, one card on the front, a True Value advertisement on the back, and two more cards inside. Opened up, it was a four card panel with from left to right, two cards, the advertisement, then the card you saw on the top of the package.

The Danny Tartabull is from the 1992 Post set, also thirty cards, Cello packs of three cards could be found in boxes of Post cereal...or you could get the whole set for $1.00 and five UPC symbols from the cereal boxes.

The two Wade Boggs cards are from the forty card 1990 Starline Coca-Cola set. Cello packs of five cards were given away with the purchase of a dinner and soft drink at Long John Silver restaurants. Most players had two or more cards in this set.

Now we've finally made it to the end of what I purchased...a 2001 Post Pedro Martinez. Only issued from April to June of 2001, cards from this eighteen card set could be found in boxes of Post cereal.

Cost for all of the cards listed in the last three posts?

I do want to thank the website keymancollectibles.com where I found a good chunk of the information I've presented in these last three posts.