Another Card Show, Another Satisfied Customer

Last Sunday I had the good fortune to make it to a card show, and once again I was extremely pleased with what I was able to find. Usually this time of year, the weather is non-cooperative and I usually avoid driving in foul weather unless I absolutely have to. This show was attended by more people than usual, so I didn't get a chance to look at a couple of tables because they were always people in front of what I wanted to look at. Everything I bought was from the same dealer (the one with all the oddball cards), and even then I had to wait awhile for some space to look at what he had to offer this time. 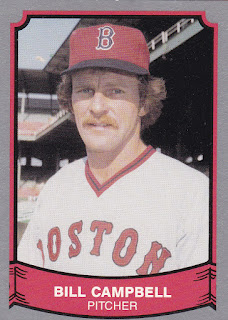 We'll start off with this card from the 1989 Pacific Baseball Legends set. I don't really think of Bill Campbell as a "Baseball Legend", but I like the card and I need it. By the way, is it a law that if your last name is Campbell, your nickname has to be "Soup" or some other derivative of that? 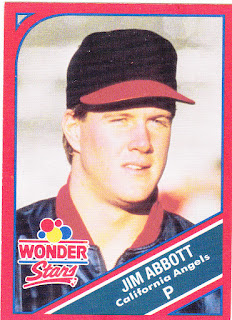 Here's Jim Abbott from the 1990 Wonder Bread Stars set. I'm not sure if I have this card or not. I went a little light on buying the oddball cards this time, because I haven't made any lists and I have no idea what cards I have and what cards I don't. 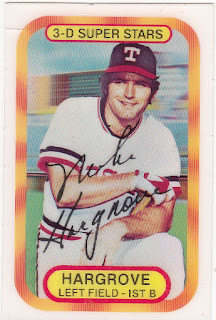 This one though, I know I didn't have. This was the only Kellogg's card that the dealer had, a 1977 Mike Hargrove.

I picked up three from the 1993 Denny's Grand Slam set...and just realized two of them are the same Will Clark card. Dang! 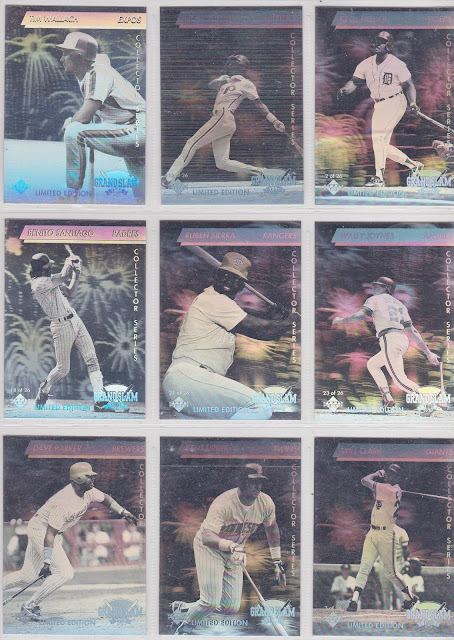 A couple years prior to the 1993 Grand Slam set, Denny's released a twenty-six card hologram set. I grabbed almost half of them. 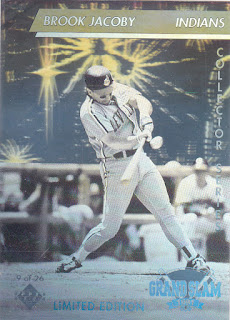 There was a promotion with these cards and if I understand it correctly (I got the information from the Beckett website), when you bought a Grand Slam meal from Denny's, you received one of these holograms. If someone on the team hit a grand slam during the contest period, you received a free meal. Almost half the teams hit grand slams, so that turned into a lot of free meals, causing Denny's never to run this portion of the contest again. 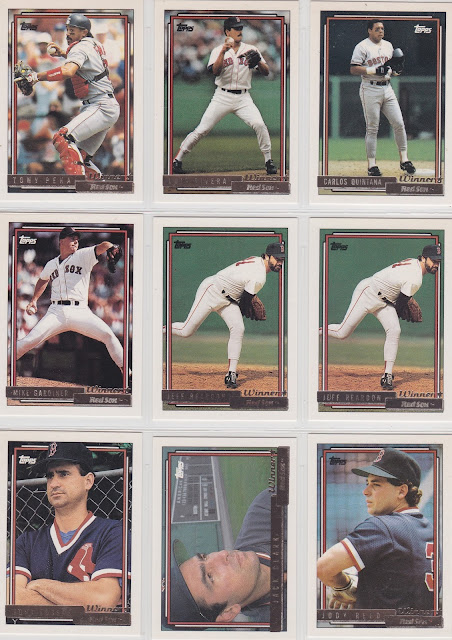 There were two 9-card sheets of Red Sox 1992 Topps Gold Winner cards. I grabbed them all without even looking at them. 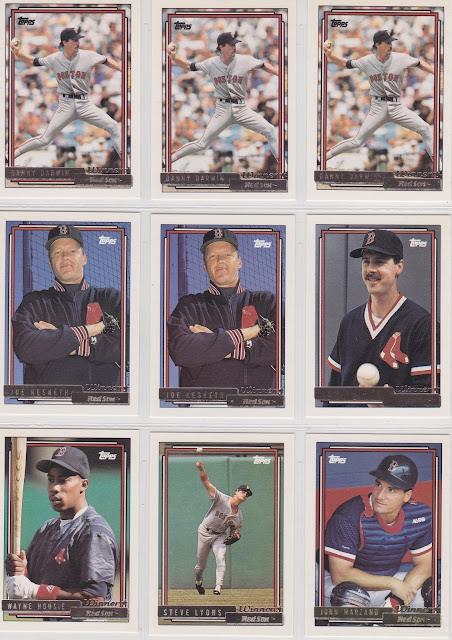 Any dupes are available for trade of course. 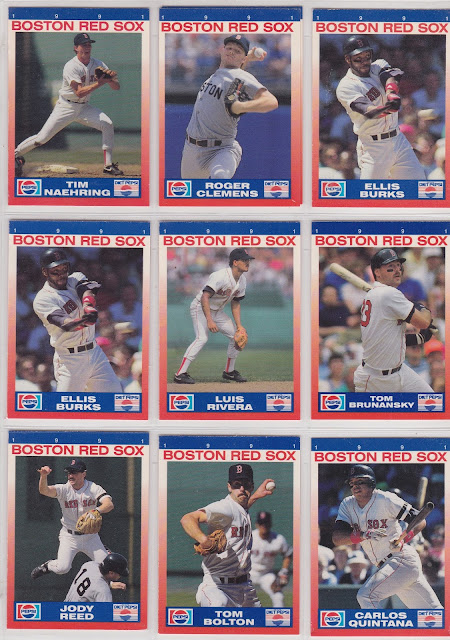 Don't you find it odd that you can be searching for cards for decades and never see them, then one weekend you hit the motherload? 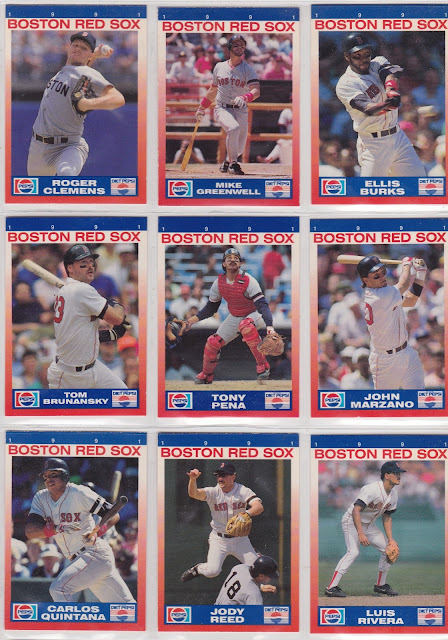 Such is the case with the twenty-card 1991 Pepsi Red Sox set. I couldn't believe my eyes when I saw four 9-card sheets of them. 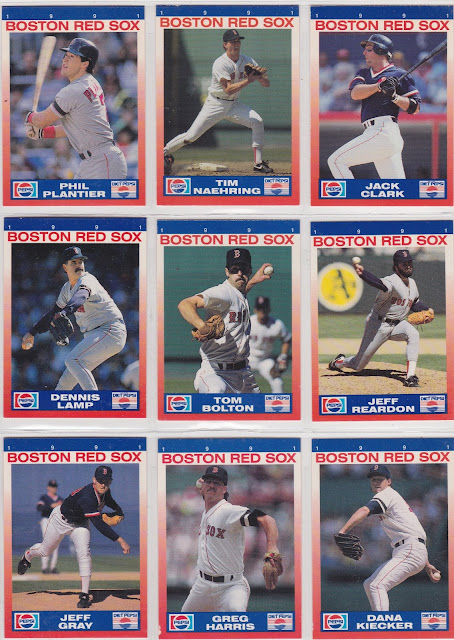 I know Metallattorney from the blog Red Sox Fan In Nebraska is looking for these cards too, so he gets first dibs on any dupes I have here that he needs. 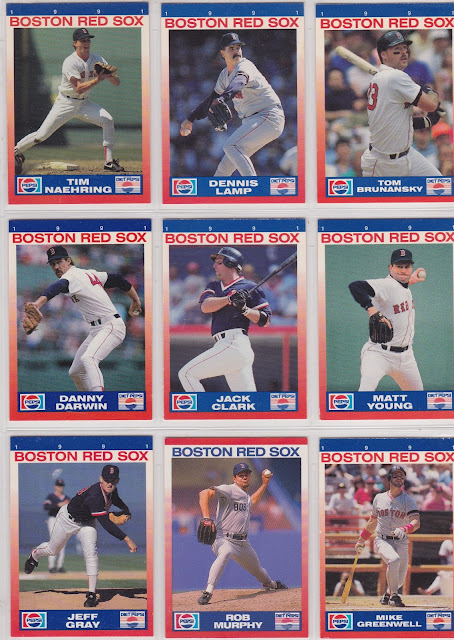 The best part of this is that I ended up getting the entire set...and even Rob Murphy from the 1990 Pepsi Red Sox set.

I'm going to stretch this out into two posts, so keep an eye out for the rest!
Posted by Swing And A Pop-up at 6:35 PM