...of the cards I picked up at the last card show, that is. For those of you not familiar with the previous two posts, they are here and here. 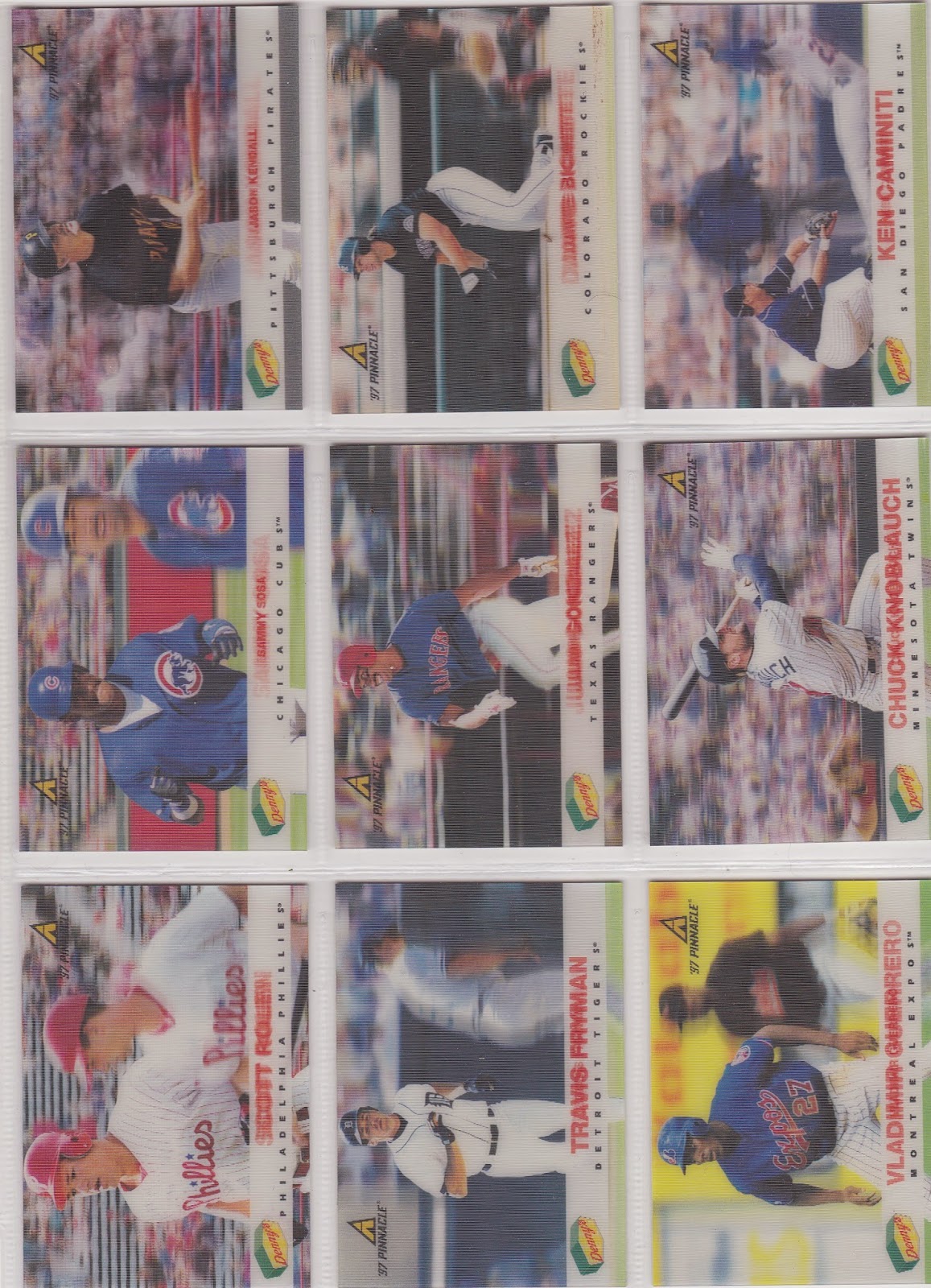 He's had a few pages of these Denny's cards in binders ever since I found his table, so I finally broke down and took one off of his hands. These are from the final year (1997) of the Denny's baseball card sets. For 59 cents (plus the purchase of a meal and beverage), you could pick up one of these cards. It was a twenty-nine card set (one player from each of the twenty-eight teams plus a card of Jackie Robinson celebrating the 50th anniversary of the desegregation of baseball). There was also a card of Larry Doby that was issued only in the Cleveland area. 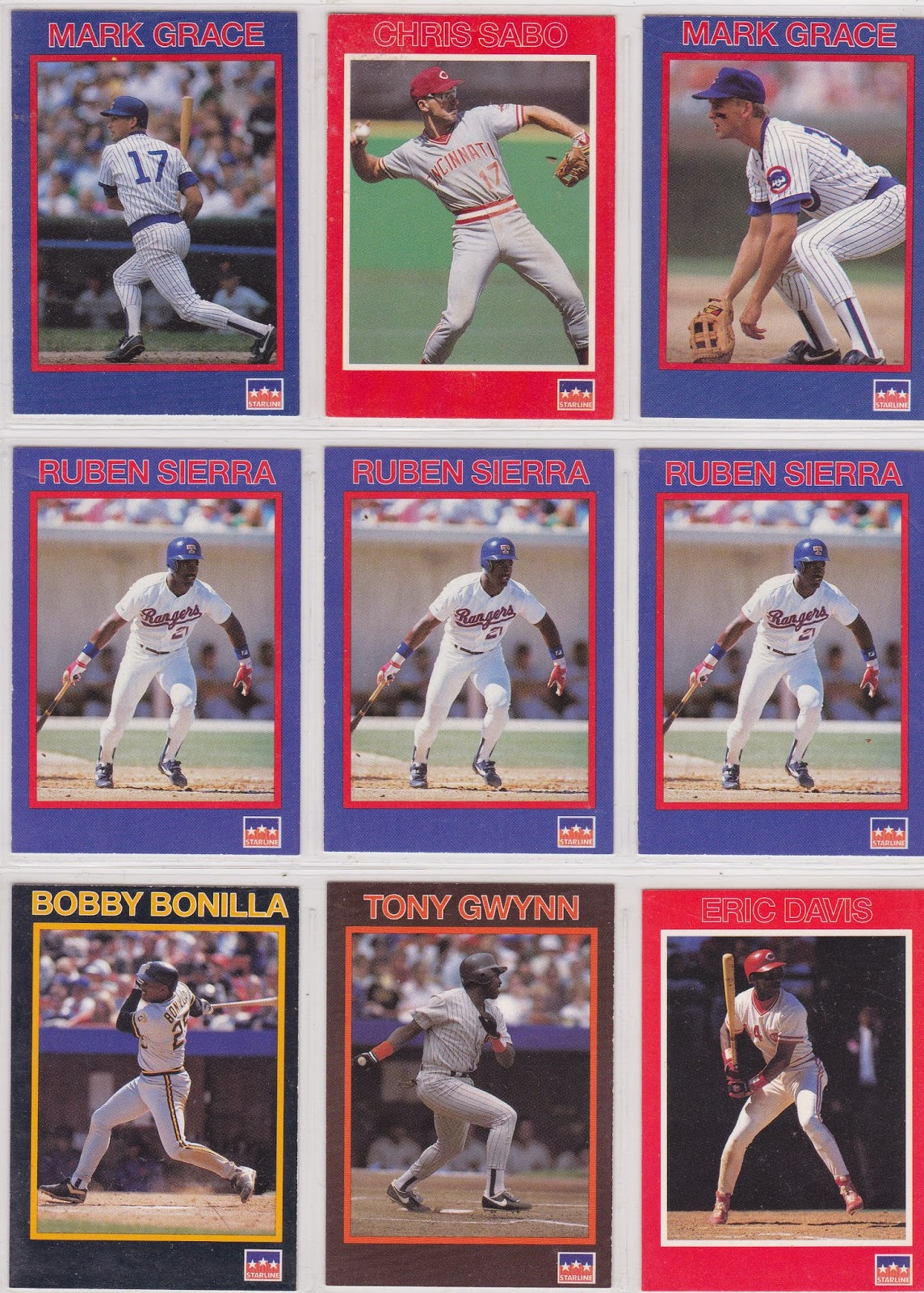 All the cards on this page are from the forty card 1990 Starline Coca-Cola set. Cello packs of five cards were given away with the purchase of a dinner and soft drink at Long John Silver restaurants. Most players had two or more cards in this set. (I picked up a couple of Wade Boggs cards from this set last month.) 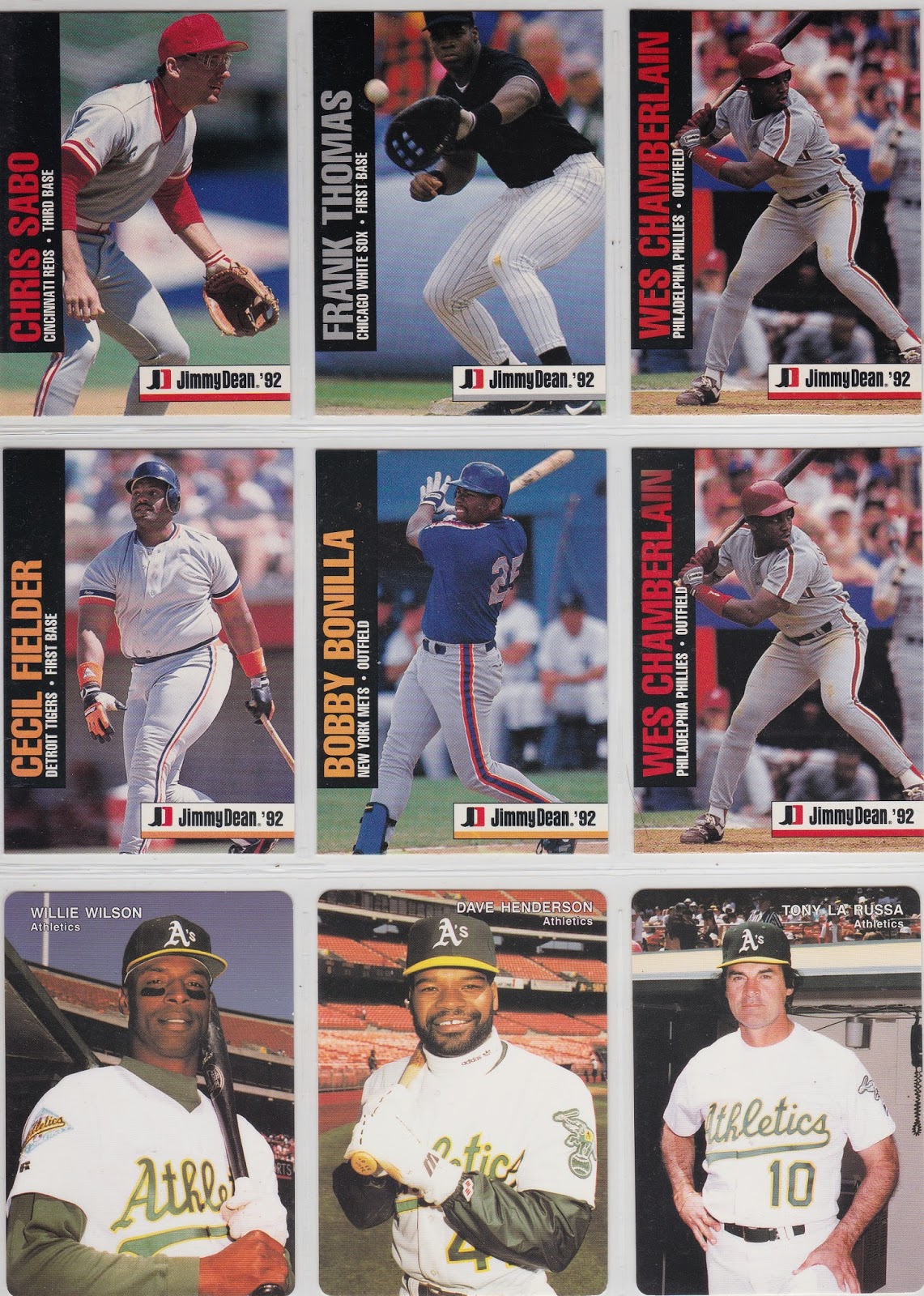 The first six cards in this page are from the eighteen card 1992 Jimmy Dean set. It was produced by Michael Schechter Associates and were found in specially marked packages of Jimmy Dean Sausage.

The last three are from the 1992 Mother's Cookies Oakland A's twenty-eight card set. 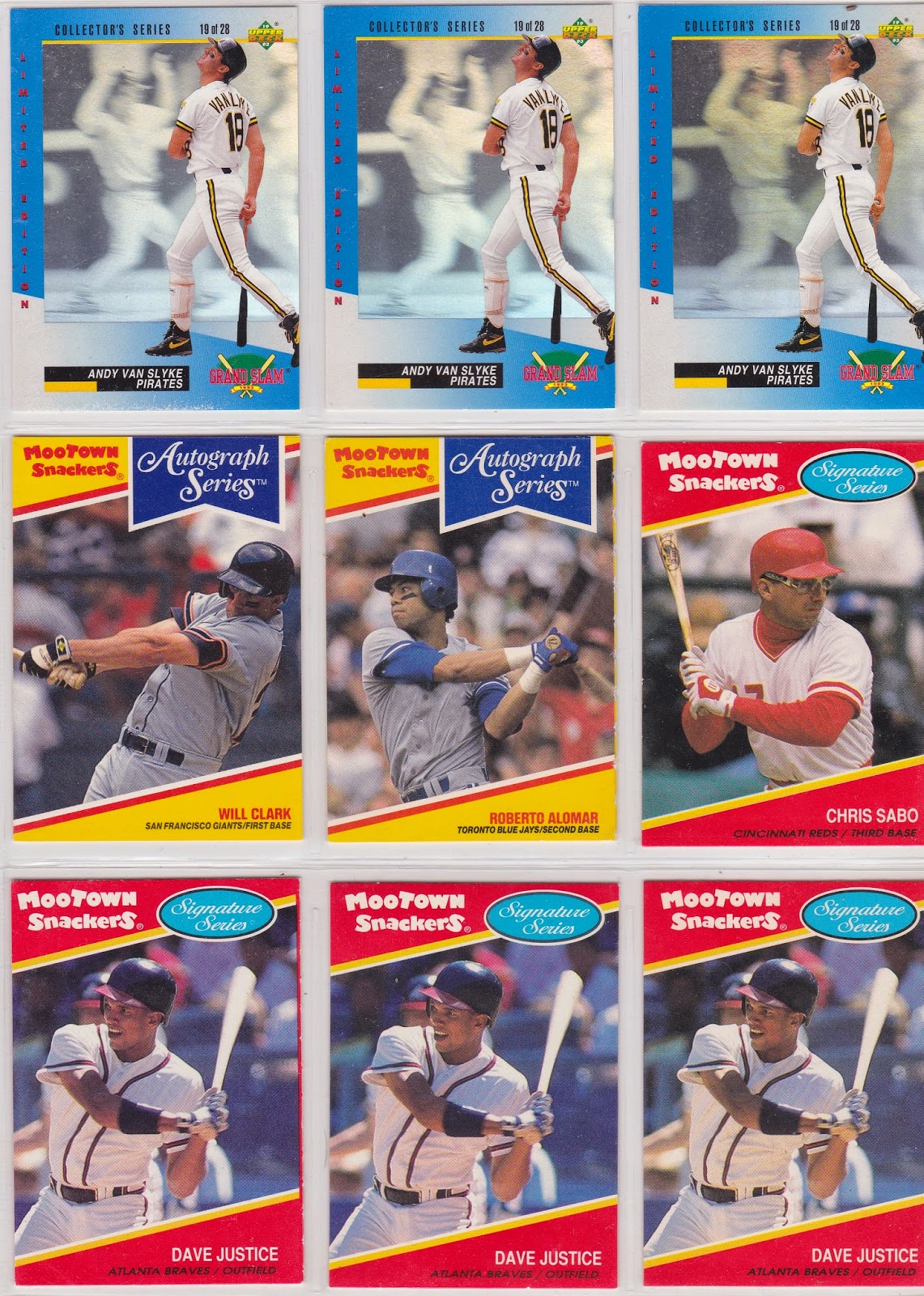 By ordering a Denny's Grand Slam meal and a Coca-Cola Classic in 1993, you could have obtained one of these Andy Van Slyke hologram cards that you see above. The 1993 set consisted of twenty-eight cards (one player from each team).

Mootown Snackers. Now I have never heard of (or don't remember) that product at all. Made by Sargento, it was cheese snacks aimed at kids. There were twenty-four card sets produced in 1991 and 1992, the yellow cards are from 1992 and the red cards are from 1991. 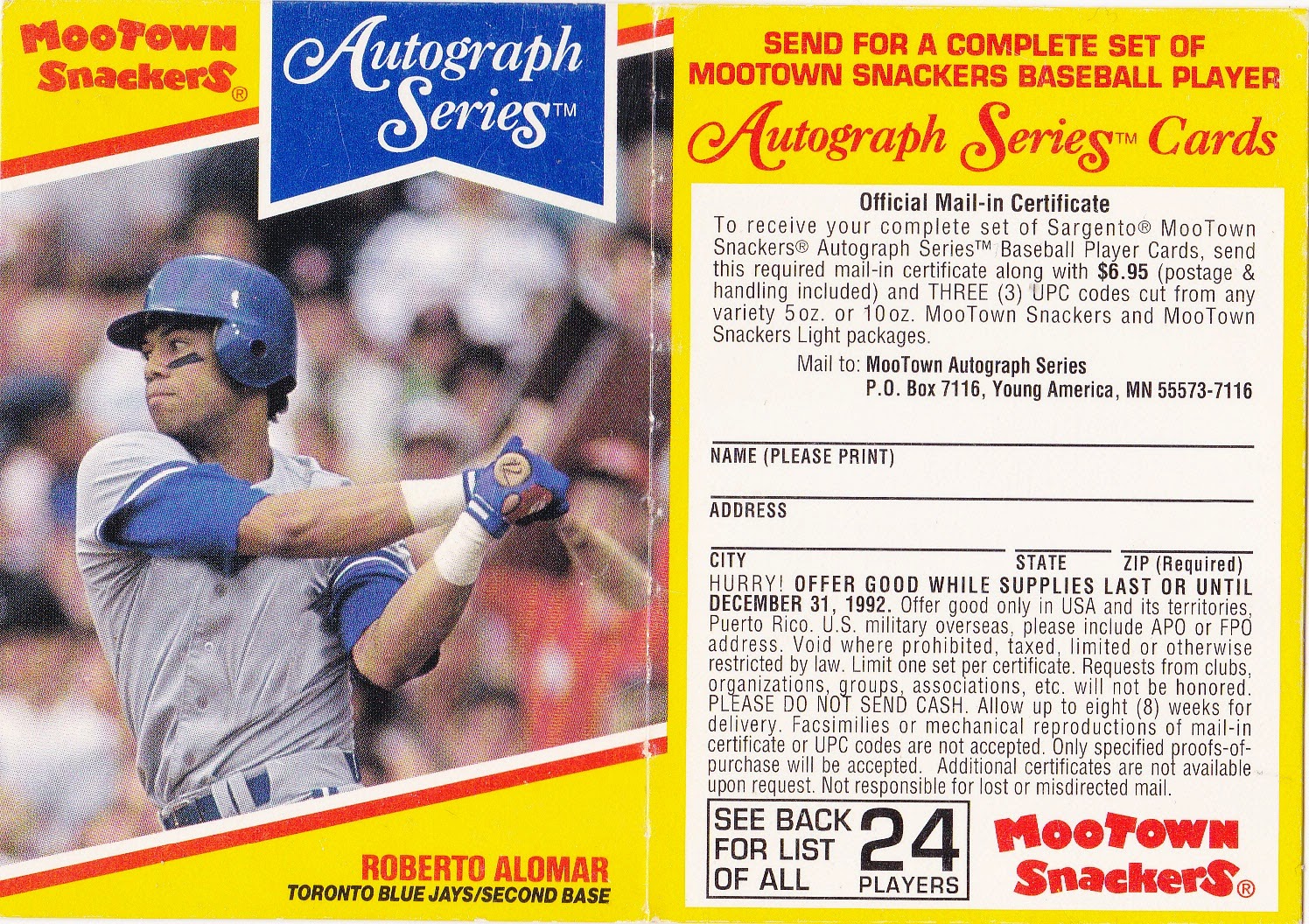 Most of the cards in this page are missing the order form attached to the card. 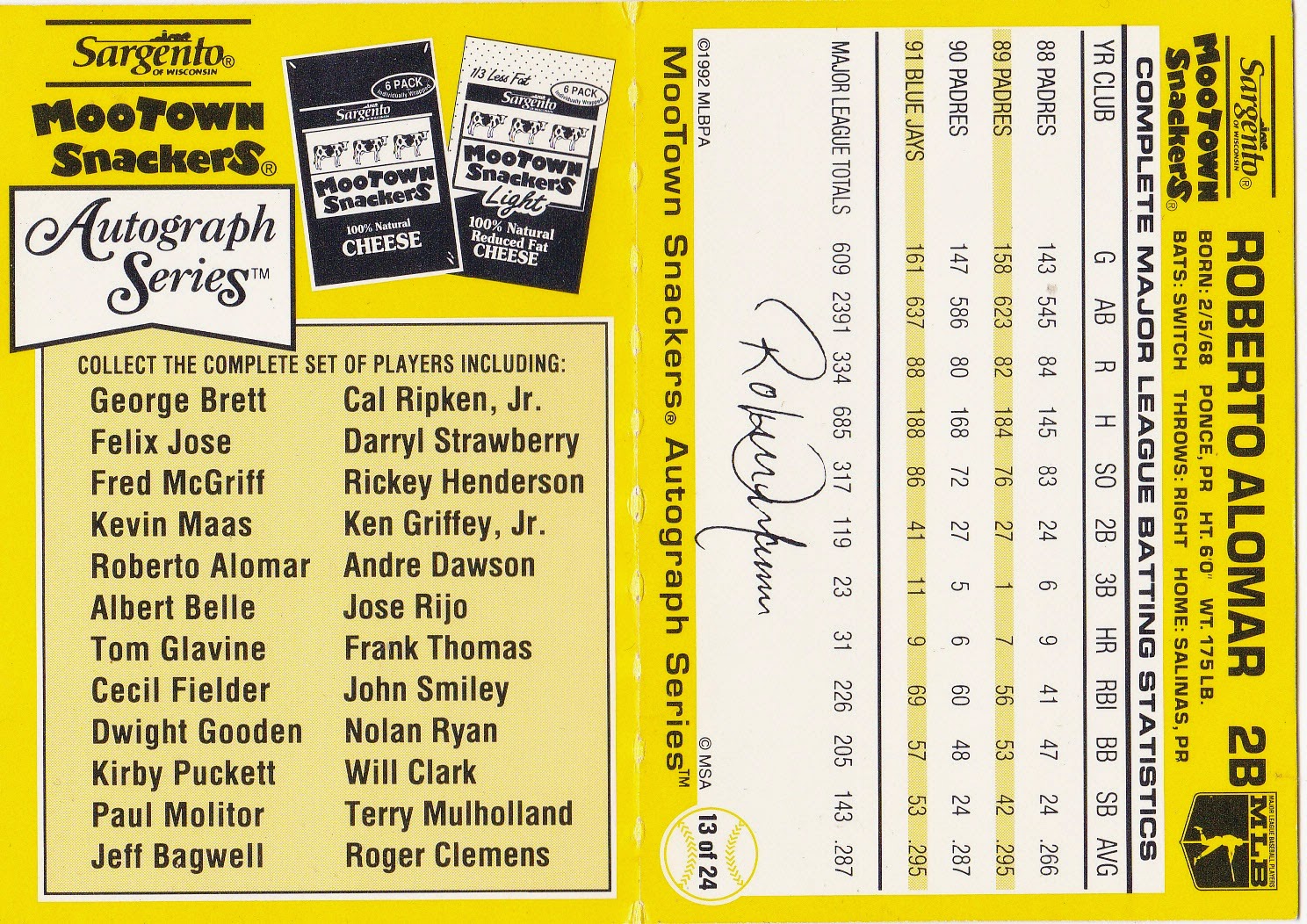 You can see the checklist for the 1992 series above, plus what the packages looked like. I'm assuming it was string cheese, and the 1/3 less fat version was probably not as popular. 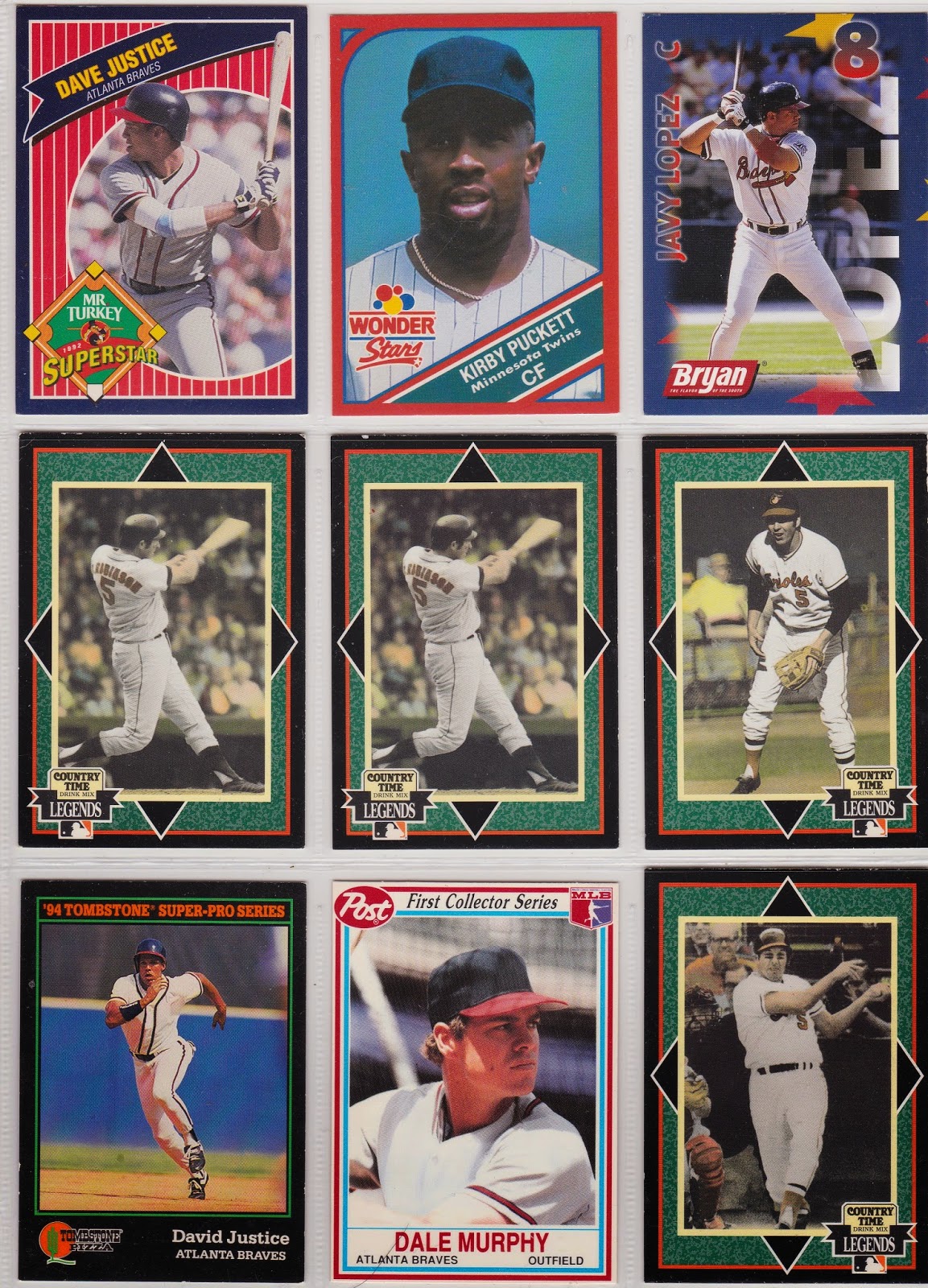 The Dave Justice card on the top left of the page is from the 1992 Mr. Turkey set. Cards were found on the back panels of Mr. Turkey products.

If you bought twenty loaves of Wonder Bread in 1990, and looked inside one of the specially marked packages, you could have theoretically completed the 1990 Wonder Bread set. If you wanted this logo-less Kirby Puckett card plus the other nineteen, and didn't want to buy that much bread, you could have sent $3.00 plus five proofs of purchase for the set in an uncut sheet form.

The Javy Lopez is from a set that Bryan Foods put out in 2000. Billed as the "Flavor of the South", they sell hot dogs, smoked sausages, salami, corn dogs, etc., with a tradition deep rooted from the south. As far as information about the card, I came up empty. However, now I'm hungry.

The Brooks Robinson cards that you see are from an un-numbered set released in 1993 by Country Time Lemonade called "Country Time Legends". From the information I could find online there are seven cards plus a title card.

Next up we have David Justice from the 1994 Tombstone Super-Pro Series. It was a thirty card set that I am going to go out on a limb and say you could find them in specially marked boxes of Tombstone pizza.

Well we've made it to the last card. Dale Murphy is from the 1990 Post set, a thirty card set that when you bought a box of (here it is) specially marked boxes of Post cereal, a three card pack was included.

I picked up a few things that were not for me, but even in doing that I came in under my $20.00 budget. I did have one regret, though. As I was leaving I noticed he had cards on another table and my eyes focused on a 1978 Topps Eddie Murray. I have wanted this card since....probably 1978. I picked it up and gazed at it. It looked real nice, but I didn't ask how much he wanted for it. I didn't have any money for it anyways, and if he had only wanted fifteen or twenty bucks for it I would have been upset with myself for not noticing it sooner. So it was best that I not know.

Maybe he'll have it next time.
Posted by Swing And A Pop-up at 8:48 AM