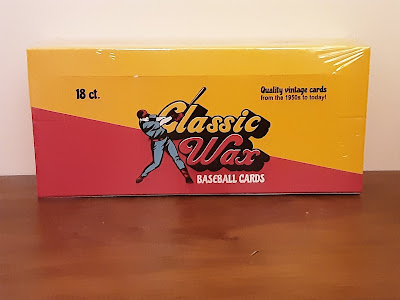 Here is the second half of the box of Classic Wax Baseball. The first half was quite good as the highlight was a 1976 Topps Pete Rose that was not bad looking. Let's see what else I can find! 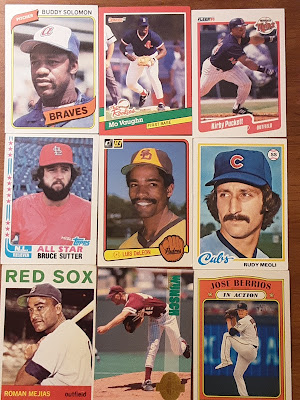 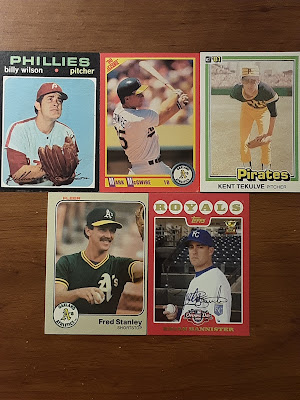 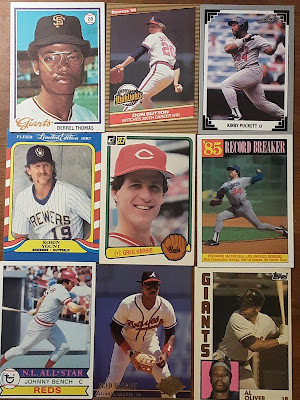 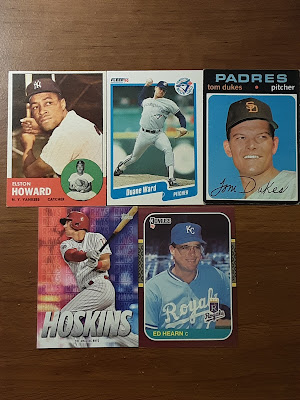 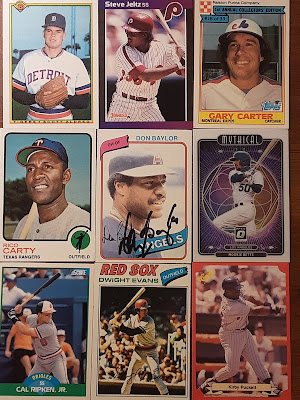 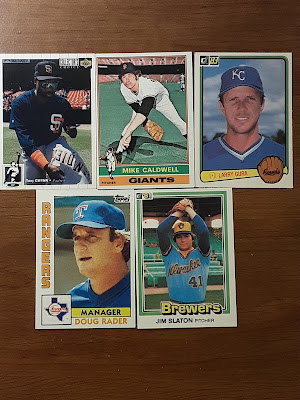 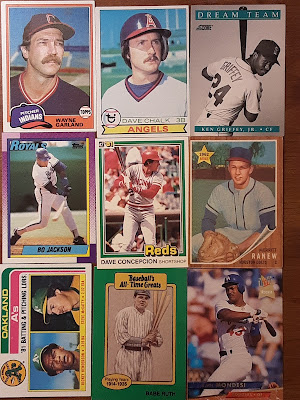 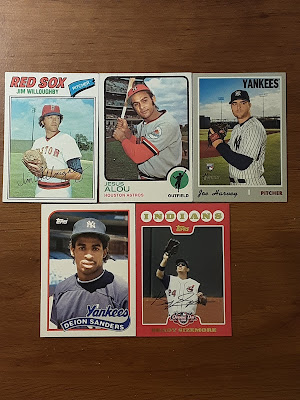 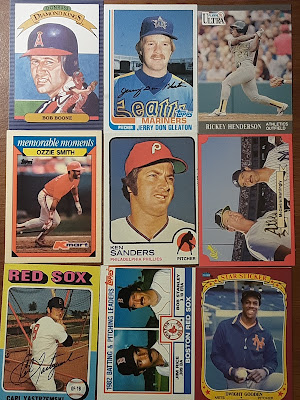 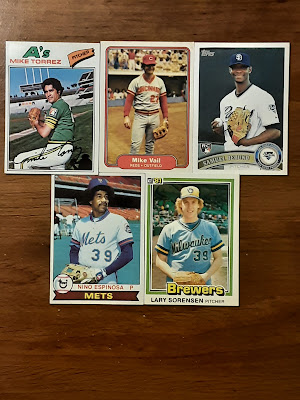 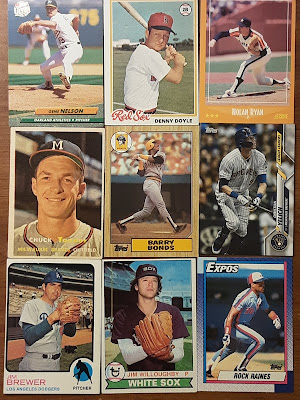 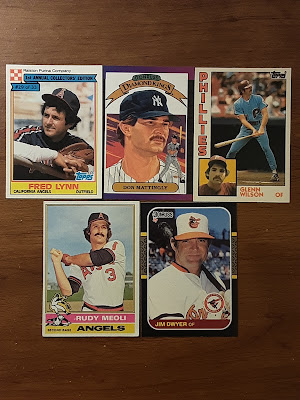 1992 Fleer Ultra Gene Nelson
1978 Topps Denny Doyle
1988 Score Nolan Ryan
1957 Topps Chuck Tanner
1987 Topps Barry Bonds
2020 Topps League Leaders Christian Yelich
1973 Topps Jim Brewer
1979 Topps Jim Willoughby
1990 Topps Rock Raines
1984 Topps Purina Fred Lynn
1989 Donruss Don Mattingly
1984 Topps Traded Glenn Wilson
1976 Topps Rudy Meoli
1987 Topps Jim Dwyer
A few highlights in this pack...first off, the 1957 Topps Chuck Tanner. This was the oldest card in the box and in pretty decent condition for being 65 years old. Even though I already have a few,  I will never get tired of pulling 1987 Topps Barry Bonds rookies. The 1978 Topps Denny Doyle was a favorite of mine as a youth, and we see the second appearance of Rudy Meoli, whose 1975 Topps card could just have easily been the banner for my blog.
Pack 16 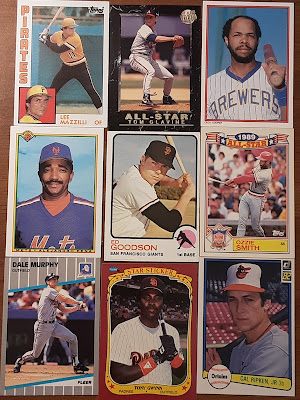 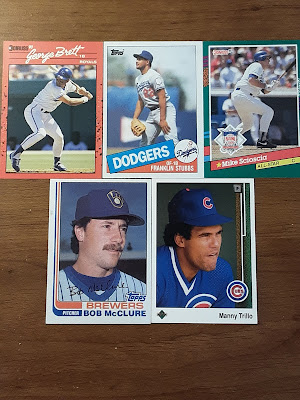 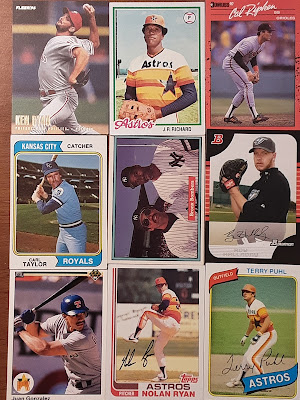 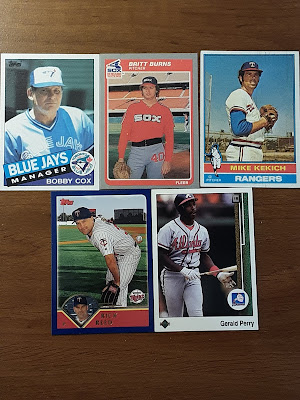 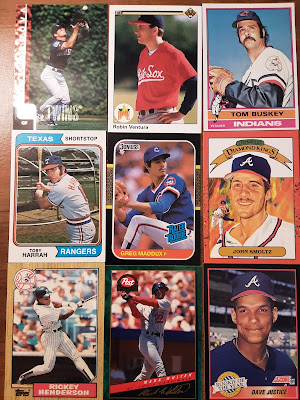 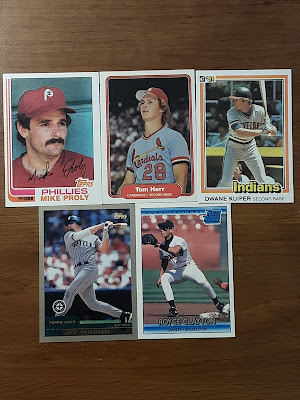 1998 Upper Deck Marty Cordova
1990 Upper Deck Robin Ventura
1976 Topps Tom Buskey
1974 Topps Toby Harrah
1987 Donruss Greg Maddux
1990 Donruss Diamond Kings John Smoltz
1987 Topps Rickey Henderson
1994 Post Mark Whiten
1991 Score Rookie Of The Year Dave Justice
1982 Topps Mike Proly
1982 Fleer Tom Herr
1981 Donruss Duane "Dwane" Kuiper
2000 Topps Jay Buhner
1992 Donruss Royce Clayton
The last pack provides one more surprise...a 1987 Donruss Greg Maddux Rookie.
I hadn't done too well with my couple of boxes of Repacked Wax, however I did much better with Classic Wax. I didn't bother to figure out the value of the cards I pulled from the box, but it's a safe bet to assume they exceeded the cost (even with being shorted one card from almost every pack). If ROI is your main concern, this really isn't the route to take, but from this very limited comparison I would choose Classic Wax. Remember, it also is about $40 more a box. If it's just about having fun and/or taking a trip down memory lane, either one of them will do the trick.
Thanks for reading!
What I'm Listening To While I Post This
Cuts Like A Knife - Bryan Adams
Posted by Swing And A Pop-up at 2:59 PM