Swing And A Pop-Up, The Science Guy

I must warn you, this is an educational post disguised as a baseball card post. You may potentially learn something if you read further. If you do not wish to run the possible risk of gaining some "important" knowledge, please exit this blog immediately.

A few months ago, I happened to find a bunch of 1982 Topps Stickers at a card show. I had either almost finished or completed the football and hockey sticker books around that time period, but hadn't made much headway in the baseball one. 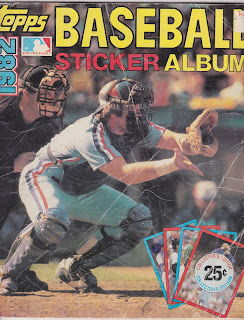 So I told my secretary to hold all my calls, and set aside an afternoon to put the stickers in my sticker book. (I wonder how many adults have said that.) 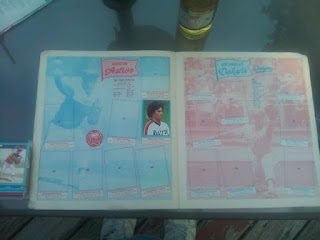 But I didn't expect to have some difficulty separating the backing from the stickers. Apparently thirty-three year old stickers don't come apart as easily as newer ones. 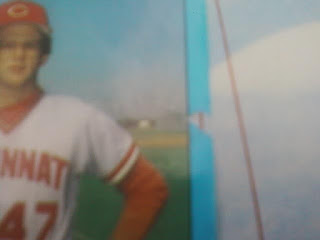 I struggled with a few of them and a couple ended up like this Tom Hume sticker. I didn't want to ruin most of them, so I tried to think of an alternative way to do this. My wife uses 3M spray mount to put the backings on her photos, so I bought a small can of Elmer's spray mount and tried that. I laid some stickers down on a newspaper and sprayed the back of them. I then put them in the sticker book.

It didn't end up working so well. 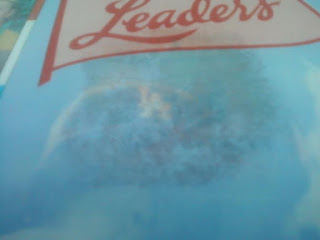 I'm not sure how well you can see this, but it stains the other side of the page eventually.

But I had another problem. In picking up the stickers and putting them into the book, I had managed to get some of the spray onto my fingers, causing them to stick together. At this point I was able to pull them apart without any difficulty, and I excitedly called my wife over to show her that my fingers were sticking together, hoping that she would share the same enthusiasm.

That didn't end up working so well either.

"What are you, a f%#cking moron?!" she shouted at me. "You're going to have your fingers stuck together! Is that what you want?"

I was going to counter with I wasn't a child and didn't need to be yelled at, but since I was sticking my fingers together after gluing stickers into a book (therefore severely weakening my argument), I decided to go get some nail polish remover instead.

Only one problem...it didn't work. My fingers were still sticking together.

I tried regular soap and water...nope, that didn't work either.

Next I went underneath the sink for some heavy duty stuff...Goop. I thought it had worked for a couple of minutes, but my fingers were soon sticking together again.

So I tried Googling my problem and most everything suggested I had already proved didn't work. I found something I hadn't tried on a craft website (which is probably where I should have looked first). 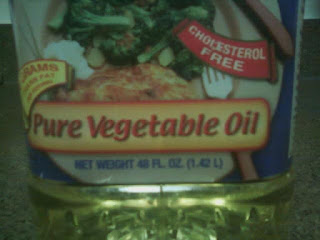 I never would have thought of that. I grabbed some from the cupboard and poured it on my hands and...it worked!

So now that the adhesive spray was no longer an option for my stickers, I ended up being very careful when trying to peel the backing off of the rest of them. There were a couple "fails", but most ended up okay, and some even peeled off real easy. I sent my duplicates to Night Owl, and he posted about them here. (Sorry I only gave you one that you needed. If I ever find more, any dupes are headed your way.)

Okay, maybe this wasn't all that scientific, but I bet you didn't know it.

Vegetable oil, it's not just for raising your cholesterol.